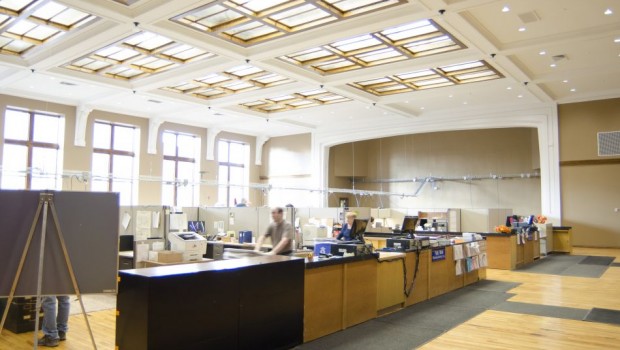 Published on June 10th, 2014 | by AberdeenMagazine

If you’ve been following the plans to remodel Aberdeen city hall, you may have overlooked a small tidbit that is actually very significant. In November of 2013, everyone in the city municipal building (Lincoln and 2nd Avenue SE) packed up and relocated to the second floor of the Aberdeen Recreational and Cultural Center (ARCC), or as many know it, Old Central High School. Depending on your age, you may remember this space as an auditorium, or the library. “I honestly never thought I’d see the day when this auditorium was restored,” David Eckert, ARCC Supervisor, states. “The Aberdeen City Council did an amazing thing by restoring this room as temporary city offices. They could have built temporary offices in a number of places, but since they put the money into this room, it is now restored, and will be a shining spot for years to come.” So don’t mail your next water bill. Take the elevator to the second floor and behold the wonder of the sunlight, the architecture and the happy city employees who get to appreciate the space for a whole year.

Avera offering vaccinations at Arts in the Park →

A True Welcome Center For Aberdeen →