People
A Cowgirl and Her Deli; Canterbury: A Cowgirl’s Deli
By Aberdeen Magazine | July/August 2013 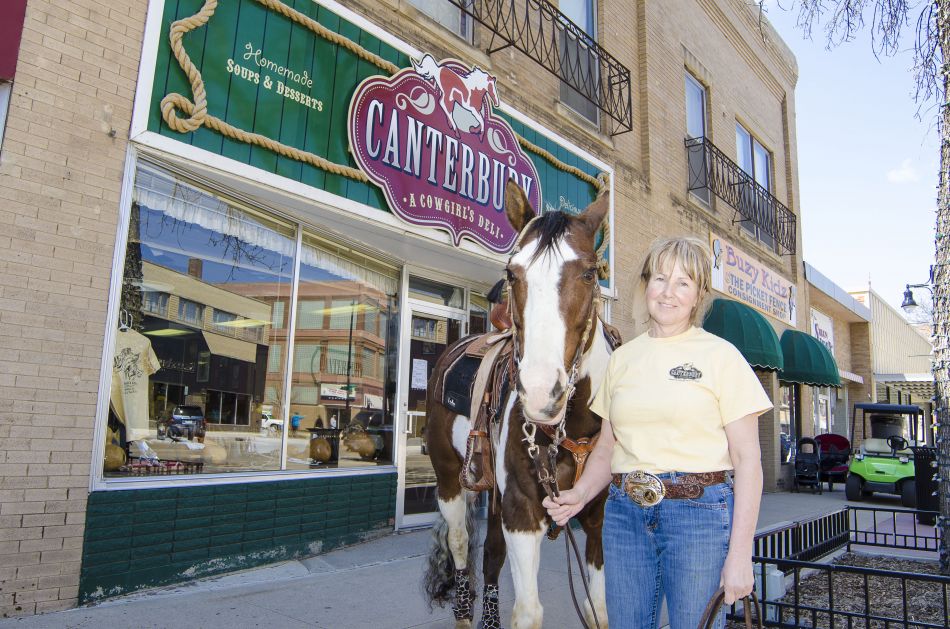 When you look up at the sign on Aberdeen’s favorite downtown deli, you’ll see the silhouette of a proud paint horse named Jet. That’s because Stephanie Aas, owner of Canterbury: A Cowgirl’s Deli, has two deep loves (besides her husband, Greg, of course); cooking gourmet food and competitively riding horses. And finally, in the prime of her life, she’s found a way to do both. As a young farm girl growing up in Iowa, Stephanie discovered her love of horses. She got her first pony at an auction sale as gift from her grandmother.

Eventually, Stephanie grew up and left her love of horses behind on the farm of her youth. She moved away to college, majoring in restaurant management. Stephanie began working for Canterbury as the manager under previous owner Bonnie Golz. When Bonnie retired, the torch of ownership was handed to Stephanie. Despite now running a business and raising a family, Stephanie would still make time to ride. She and a friend would take riding trips together. On one such trip in Wyoming, Stephanie encountered Tex, a Doc O’ Lena bred horse that was already well-trained.

When she returned to Aberdeen she found it difficult to leave Tex behind. Then to her delight, on her 50th birthday, in walked Tex, and Stephanie’s dreams of horse ownership were reborn. Stephanie loves a challenge so she got into competitive riding and began barrel racing with Tex. She has since retired him from competition, now riding a younger horse named Jet. Stephanie is so happy to have finally united her two lifelong passions, riding horses and cooking great food. So she felt it only fitting to share the good news with her customers. That’s why Stephanie combined her two loves within the tag line of her restaurant’s new logo, “Canterbury: A Cowgirl’s Deli.” And the horse that carries her through, Jet, became the proud symbol on her sign. //