People
The Man Behind the Curtain; Daniel Yurgaitis
By Aberdeen Magazine | July/August 2013 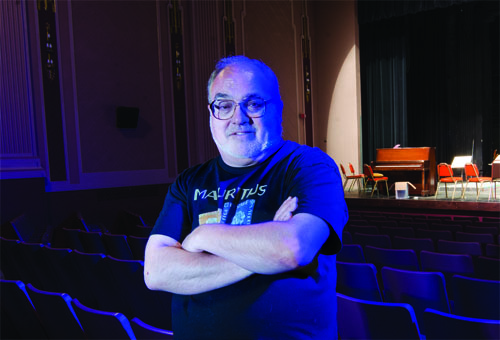 Aberdeen is small enough to be friendly and down to earth, yet filled with a diverse culture of people who value and contribute to the arts. He loves that he can go to pick up a loaf of bread and run into a community member who’s seen one of his shows and is willing to give constructive feedback. He thinks it’s great to find out that people have enjoyed a particular musical number, were inspired by a feeling he’d hoped to evoke, or that they’ve simply appreciated all the hard work that went into the theatre production.

When choosing his plays, Daniel looks at the population of actors and their specific talents. “I also consider the cost for the production, costumes and scenery. I like to vary small and large productions, heavy topics and things that are fun and light.” He considers what plays are being done on a national level, yet ensures his choices are applicable and conducive to our community. He tries to offer a variety of productions, knowing not all will  suite everyone’s tastes. In addition, he likes to vary the types of productions to give actors an opportunity to work with different composers and to give audiences pieces that create conversation. “The audience should be an active part of live theatre,” says Daniel. Daniel loves life in Aberdeen almost as much as he loves the theatre.

When he moved to Aberdeen from Chicago in 2000 to become a Professor of Theatre at NSU, he was very impressed to find not only an active university theatre, well attended and supported by the community, but an active community theatre as well. According to Daniel, it is rare to see such a thing exist in a town of this size. When he learned of the impressive quality that Aberdeen Community Theatre produced, he couldn’t help but put on a second hat, and become the guest director of ACT. “The productions offered by both NSU and Aberdeen Community Theatre are of a quality that is recognized throughout the country and beyond,” says Daniel. In fact, in 2008 the ACT one-act plays competed in Japan.

Because of its reputation of excellence, local theatre is well-supported and attended by not just NSU students or the ACT theatre community, but by the general public. Daniel feels NSU theatre is so well attended partly because the Johnson Fine Arts Center, as well as the rest of campus, is so accessible and welcoming to the public. “We have more of an open campus layout than some, so the public feels comfortable attending events here,” he says.

Daniel is impressed with not just theatre in Aberdeen, but by all of the interesting and intriguing artistic opportunities Aberdeen offers. “Aberdeen has a ton of things to do, different things, and community members support and attend the events, making their continuation possible.” To him creative expression is a crucial component of life. He believes it’s essential to make time for whatever your creative passions are. “Creative time is always time well spent,” says Daniel. He’s happy to give locals the opportunity to discover themselves creatively by providing a chance to participate in all aspects of theatre production, whether it be acting, building and painting scenery, or making costumes. “A practical woman who used to sew clothing for her young children might come to find she delights in designing a red velvet cloak for a king!”

Daniel works hard for theatre’s continued growth. Eight years ago he crossed a milestone by creating a new major at NSU, called “Musical Theatre.” Before this, the study had only been available as a minor. The availability of this major further strengthened the identity of the theatre community. And Daniel’s efforts don’t stop at the city limits. He’s made it his mission to bring theatre out to rural areas as well. Eight years ago, along with a few interested rural citizens, Daniel started the Northern Fort Playhouse Foundation, which became the governing board for the Northern Fort Playhouse. Others joined in the cause and they started on their first season. Northern Fort Playhouse is located in the beautiful and historic setting of Fort Sisseton, S.D. “Rural people are so glad we’ve brought the theatre to them, especially because those in remote areas don’t always have access to the arts,” says Daniel. Many Aberdeen folks attend the Fort Sisseton Playhouse as well, and tourists passing through make it a point to stop. “It’s a beautiful historic fort in tip-top condition that’s only a little over an hour away,” he states.

Since Northern Fort Playhouse’s first season, they’ve made physical improvements to the Playhouse and made dinner theatre a part of the show. The event offers a weekend-long adventure in a peaceful and enchanted setting. The weekend consists of two shows, usually a light comedy and a musical. Friday night’s show includes refreshments of wine and cheese and Saturday’s has an optional lunch. Along with community support, volunteers and donations contribute to making the Playhouse a continuing success. And donations make it possible to keep ticket prices low. Daniel works year round and has gone above and beyond to maintain theatre’s strong presence within our community and its surrounding area. Why? Because as he puts it, “Theater fills the soul.” He sees how good people feel expressing themselves in a creative way. But he doesn’t do all the work alone. Actors and volunteers put in their time too, often working long hours every night just prior to a big production. But they wouldn’t have it any other way. Daniel states, “We all enjoy giving back while coming together as a group to create something beautiful.” //