People
A Marriage In Creation; Nick and Nicole Fischer
By Aberdeen Magazine | November/December 2013 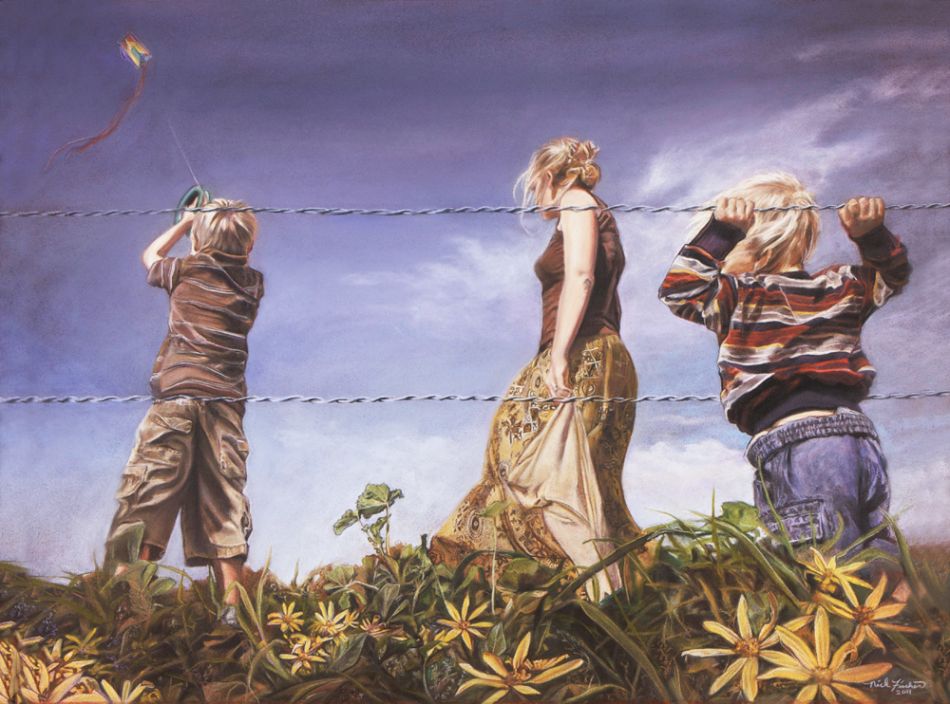 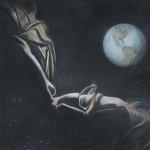 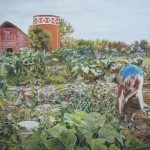 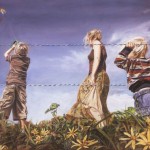 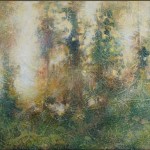 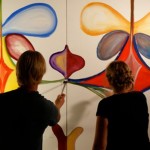 Nick and Nicole Fisher live in a beautifully self-restored early twentieth century home on the edge of town. Blue-eyed and blonde haired, the two met in college with a dream of making it in the real world. Their home is filled with a feeling of tranquility and the sound of their three towheaded boys playfully giggling in another room. The Fischers’ home is simple yet elegant, their own pristine artwork accenting nearly every wall. It is not often you meet a couple so equally talented and fully supportive of one another’s work. In pursuit of their mutual dream, they’ve weathered the hardships that come along with trying to make it as freelance artists. But both Nick and Nicole agree, they wouldn’t be where they are today without the support of their biggest fan, the Aberdeen community.

Aberdeen Magazine editor Barb Andrews had the chance to speak with the couple about their lives as artists in Aberdeen:

NICOLE- Art has been a part of my life since I was born. My mom was an artist so I’ve been around it always. I remember her teaching classes to kids that would come over and I would be there, and kind of soak it in. I took every class I could in high school and it just seemed like the natural course of things to continue with it in college at Northern.

NICK- I was into art as a pretty young child. When I was six years old I found one of my dad’s old sketchbooks from when he was in college. I found some drawing pencils and sat down and drew a picture of E.T. with a flying saucer. I put a lot of work into it, it turned out pretty cool, and I got a lot of praise for it. That is one memory that sticks out. Through elementary school I would draw characters and started taking classes at the ARCC from Lora Schaunaman and Lois Beckner.

When did you decide to make a career out of creating art?

NICK- In college, for both of us. I got involved right off the bat. In my second year at Northern, Ben Victor, Jake Bosmoe, Ben Grote and I started a little mural business. Our first mural was the one we did for Gypsy Days at Lager’s in 1999. They paid us a little cash and we worked on it all night. Lager’s just wanted it for a few months, but they liked it, so they ended up keeping it for years. Jake kind of got out of the business, Ben and I did a few more, and then Nicole and I got married and started doing murals together. I became a founding member of the Artworks Cooperative and started showing art all over town. I got into the framing and matting thing, and started actually selling pieces.

What about the Aberdeen community has enabled you both to succeed as artists?

NICOLE- The community supports us through numerous cultural and art focused events that happen throughout the year, and through the availability of venues, such as Gallery Go, the Artworks Coop, the Red Rooster and the Dacotah Prairie Museum. We’ve noticed that when we volunteer and help out at other events, it brings that back around to the events that we participate in, the ones that we want people to come to that we’re involved with. It’s kind of a give and take.

NICK- We had a big group of artists, people working together, when we were both attending NSU. We developed a lot of friends there who have also stayed in Aberdeen, and we continue to support one another. Local artists Jake Bosmoe and Ben Grote hang out with us and we talk art. We’ve also collaborated with Matt Schaefer, the former Gallery Go art coordinator, and local sculptor Ben Victor.

Do you create art as a family?

NICK- The kids watch me draw every night. I’ll sit down with my chalk and my paddle and they’ll take turns throwing out ideas. Then they watch me draw until they fall asleep. They have a hard time falling asleep without me drawing for them. We try to get them involved in making art too. We’ll take them up in the studio and work with them one on one.

NICOLE- It’s hard for them to all work together because they demand so much of our attention, for them to gain anything we like to just keep it one on one.

What collaborative pieces have the two of you done?

NICOLE- We’ve done some symmetry paintings. One of us will make a mark on one side of the canvas and the other one mimics it and we take turns going back and forth copying each other’s paint strokes. And we jointly teach the Granary workshop every year for the high school students.

NICK- We do a big mural project with them every year. We have one in front of the Dacotah Prairie Museum that we did with students in high schools from all over South Dakota.

NICK- Worthington, Minnesota has had us come for the big town festival; it’s a Windsurfing Regatta. They are world renowned for their windsurfing on the lake. Nicole and I have gone a couple of years to lead a community mural project. They give us a design and direction.

NICOLE- They’ll tell us what aspects they want and we’ll design it and build it.

NICK- We bring it and the community paints it and we guide them. We then put the whole thing together and install it and everything.

What are the biggest differences between your artistic styles?

NICOLE- Nick is much more detailed then I am. I don’t like hard edges as much. I like to keep things a little more ambiguous. I like to have the viewer see things for themselves in their own head and Nick seems to break things down into a little miniature universe with depth that goes so far into the painting.

NICK- I love doing portraits and faces. I’ve got a really good knack for faces and portraits. We both really like doing figures.

NICOLE- We both love painting people. We’re both able to do pretty much anything.

NICK- We do a lot of landscapes on commission.

What inspires your work?

NICOLE- I feel like art is so engrained in me I can’t really imagine doing anything else. But at the same time I have a lot of interests other than art. I use those other interests like gardening, anatomy, and just things that I’m interested in in life and I transfer those into image making. I really like figures and nature.

NICK- Me too. My realistic work usually involves a figure interacting with nature. I was always very interested in nature, in looking up close at things like wood, rocks, and grass. When I was a child I would get my face down into a small piece of lawn and appreciate every little detail, every blade of grass, every ant or bug.

NICK- I like doing portraits of people from life and throwing in narratives into the scene, elements that describe the person like colors or shapes, and mystical symbolism. We both try to keep things positive by putting beauty in our art instead of focusing on the negative aspects of life. There are just way too many artists who focus on the negative aspects of life.

NICOLE- And that’s mostly for shock value and to spark conversation, but there’s just way too much beauty to be acknowledged.

NICK- We try to keep it on the positive side and sometimes a little bit on the weird side.

Did you face discouragement about your choice to pursue a career in art?

NICOLE- Yes, from my parents, in fact. I realized why too. It’s not easy. They wanted me to do something practical. It’s definitely exciting, but there is a struggle. You have to put so much extra effort and time into creating art because it’s hard to find your market when there is so much mass-produced art available. It’s hard for some people to understand why original art is important.

NICK- And why it should be appreciated.

NICOLE- It’s more than just a craft or a hobby. So there are a lot of challenges there, but we have other things that help sustain us too. We don’t make all of our income off of art.

NICK- We seem to be doing better and better every year. Some years, in our best years, a third or a half of our income comes from art. We both work for my dad for additional income. I do construction and all of his painting when he’s building apartments. There have been times where we’ve gotten hired for big art projects and I’ll take three or six months off of work and just be doing art full time if it’s a big enough commission. It’s often nights and weekends that we work on our art, though. Sometimes it’s not fun, but it’s always fulfilling.

NICOLE- To keep our art in shape and to develop it–it takes a lot of self-discipline. The hardest thing is to get up into the studio. Once we’re up there it’s fine. We have to wait until the kids are sleeping. But if we’ve set ourselves a deadline, we don’t have a choice.

What motivates the two of you to keep on creating despite the challenges?

NICOLE- It is a struggle to make a living doing art, but that struggle is where the passion comes from. If you’re going to make art you have to have that passion there to keep it going.

NICK- Part of what keeps us inspired is what we call our “fun art.” It’s funny, we have our business art and we have our fun art. We’ll spend a Friday night with our artist friends, listening to music and enjoying drinks. And we’ll all just throw paint around, playing all night long, creating multiple pieces at one time.

NICOLE- It’s fun in that environment to have that fear removed, no expectations, where it doesn’t matter how it turns out. We find it very liberating. And it reminds us to stay lighthearted about our art when it comes time to rein it in.

Why does art matter?

NICK- It’s a gift you can give to people, to share with others, and something you can contribute to the rest of the world.
NICOLE -And it’s something you can help yourself with. By using it as a release or as a quiet place to practice something while working things out in your head, like a meditation.

NICK- There is so much stimulation around us all the time. Art is important as a way to get someone to stop, to slow down, and take something in that’s not a moving picture, not an iPod, or a television. Those things are different, not saying anything against them. They are what they are, but there’s something else about slowing down, looking at details, and taking in shapes and texture. Art is more raw than a digital device. It’s important to keep the appreciation of art up, to keep the legacy going. I don’t think art will ever die.