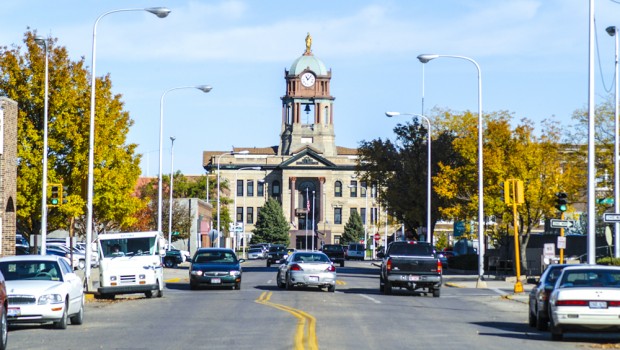 Published on July 8th, 2014 | by AberdeenMagazine

Have You Seen This Woman?; Statue of Justice

We Aberdonians travel these roads day after day. Seeing familiar buildings and streets, which by our memories are held in place.

We’ve become desensitized. We look for exciting things to do here. We fall back on the same old things. We’ve become “monotonized”. We see the picture on the cover of this magazine, a golden goddess, a pristine statue we’ve perhaps never seen before. We think, “Wherever she stands she must stand majestic, unable to be ignored.” We look up to the clock tower that tops the courthouse in the center of our town. Our eyes stop, so often, at the clock. We’ve been ignorant. We’ve missed out. There since before our grandparents were born she’s stood, Lady Justice, watching over this beautiful city. The city where we took our first step, spoke our first word, or had our first kiss. And yet we’ve overlooked her – some of us never seeing her at all. So what else, we must then ask ourselves; what else have we missed?

The statue of Justice, standing astute on the cover of this issue, is the highest point of the Brown County Courthouse, at 10 feet 8 inches tall. She’s topped the clock tower since 1903. She holds a sword in her right hand next to her chest, symbolizing the power of reason and justice. She holds scales in her left hand, balancing the scales of truth and fairness. And she stands on what looks like a block, but apparently represents a book, The Book of Knowledge. Under this book one should see a serpent, making the statement that with knowledge one is able to destroy evil, but our statue’s elements have been oversimplified, losing this detail. According to the book, Brown County History (North Plains Press, 1980), our Lady Justice is made of copper.However, by the Midas touch she’s been turned to gold, or more likely, by the brave painter who restored her in 1953, when he climbed the tower to find Justice completely unattached from the base and “just resting there.” In 1988 the statue was painted for a second time to appear as she does today.

However, Cliff McQuillen (the publisher’s grandfather), saw some inconsistences between our statue and the description of Justice listed above. He took to his grave that our statue was not Justice at all but rather Lady Liberty. Cliff ’s protest showed merit upon closer examination. The statue’s sword appears to be the object of focus and the balance scales, which are always the featured element of any Lady Justice, are held loose and limp at the statue’s side. Our Justice diverts the onlooker’s gaze, but is not blindfolded or blind, as Justice is supposed to be. In addition, if Grandpa Cliff, as most of us, knew little of the history of Aberdeen’s Lady Justice, he might wonder why a statue made of copper (which is the color of a penny) gleams in a bright gold.

So we began to search for answers. Did the county actually receive its intended “Justice” statue, or did they end up with a one-size-fitsall statue altered to look like Justice with addons of a scale and sword? We looked through old courthouse documents dating as far back as the late 1800’s. We interviewed locals versed in Aberdeen history. We looked at historic brochures and pamphlets. What we were surprised to find is that no one knew a whole lot about a huge golden statue standing over 10 feet tall in the center of town. And so our quest continued. When looking through the 1903 County Commission Meeting minutes we found: The “Statue of Justice” ordered from W.H. Mullins Manufacturing in Salem, OH, and a four-digit number, “6875” for “$200”. A check number perhaps? An invoice number? An online image search brought up a page from a Mullins Statuary Catalogue, which included four-digit item numbers, assigned to each statue. Number 6875 must then be the item number for the Mullins factory-made Justice statue our county officials selected over 100 years ago. We contacted a historical society in Salem, OH for assistance. Fortunately they had a vast collection of Mullins ephemera. They dusted of their 1900 Mullins statuary catalogue and found item number 6875, “Justice with Scales at Side,” an exact match. The mystery of Lady Justice’s origin had been solved! Yet with her crown of stars and perfect sight we still wonder, even though the catalogue says “Justice,” is it really her?

Through our exploration of Lady Justice we looked deeper into our surroundings, and we found not only an overlooked treasure but also a connection to our very roots. Like the golden Lady Justice, we have beautiful treasures all over this fine city, some hidden in plain sight. And so we encourage you to go forth, and seek out all the bounty this great town has to offer, to encourage you to love this city a little more, and to help you realize (if you don’t already) that life truly is good in Aberdeen.