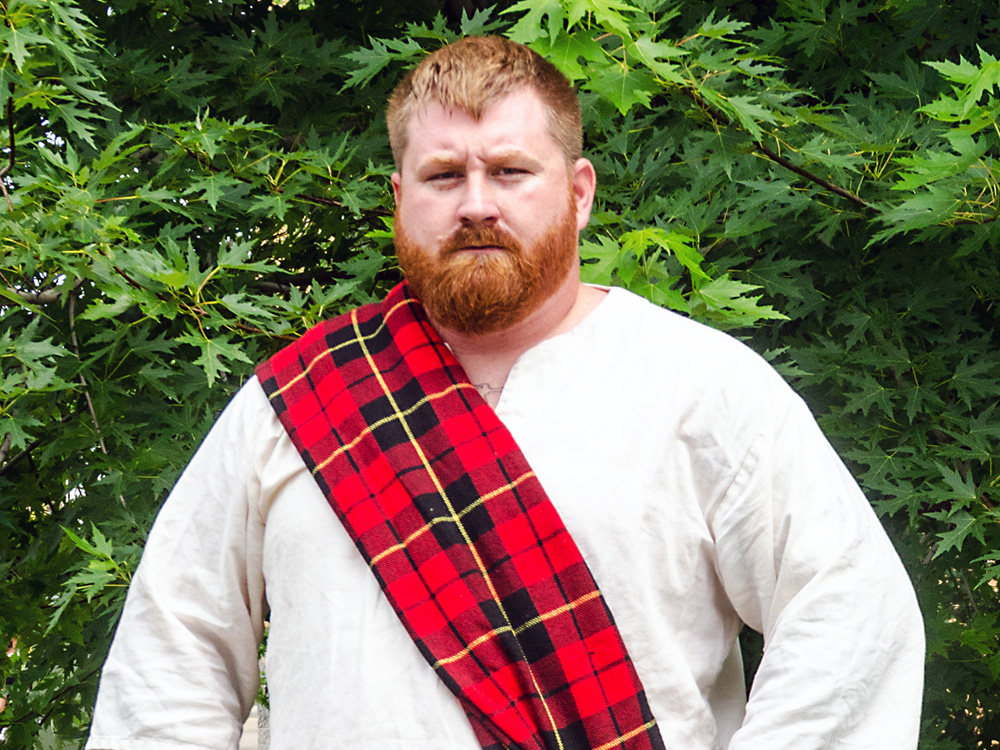 Takes pride in his celtic heritage.

Anthony Bergalowski, a local farmer whose friends call him “Red,” is one-quarter Irish and takes pride in his cultural roots. This is one of the reasons he makes it a point to annually attend Aberdeen’s Northeastern South Dakota Celtic Faire with his wife, Katie (who is full-blooded Irish) and their three children.

Red has especially enjoyed practicing the Celtic Heavy Games, traditional Celtic games performed as part of the Celtic Fair. Red’s large stature gives him an advantage when playing such games as: the Caber Toss, Hammer Throw, Sheaf Toss, Putting of the Stone, Weight over the Bar and Weight for Distance.

Red and his family love all of the unique festivities offered by the Celtic Fair. Red partakes of such traditional Celtic refreshments as Guinness, a popular Irish dry stout and Jameson Irish Whiskey. Katie adores shopping for handmade crafts and clothing, and the whole family gets a kick out of seeing folks parade about in traditional Celtic attire. A hearty traditional Celtic meal accompanied by an ambiance of music performed by such bands as the local Long Nines and Twin Cities Brian Boru Pipe Band, as well as the rhythmic sound of the ARCC cloggers, makes for a great time that the whole family looks forward to with anticipation.

Red first became interested in learning more about his own Irish heritage when he enrolled in the military at age 18. “Joining the military gave me a more worldly view and, in turn, made me realize the importance of finding out more about who I am as a result of my heritage.” So, Red contacted his grandmother, Patricia Clarke Berkram (who is 100% Irish), who has made it a lifelong goal to research and preserve the family history. She was excited to hear of Red’s new found interest in his cultural roots and jumped at the chance to educate him on the hardships and victories experienced by their ancestors. Since becoming a father, Red feels even more strongly about preserving his family’s cultural legacy for the sake of his children and and generations to come. “It’s important to me that my children know where we came from. The farther away we get (generationally speaking) from my grandmother, the more we are at risk of losing information about where we came from.” This is why Red is pleased that Aberdeen has such cultural events as the NESD Celtic Faire, where folks can come together to celebrate what both unifies and diversifies our community.