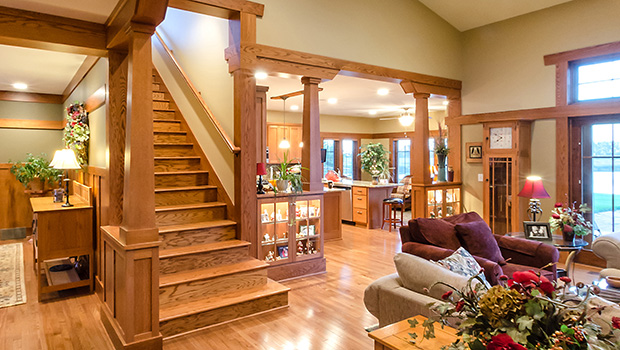 Welcome to the Home of Aberdeen Magazine’s Troy and Suzette McQuillen.

As the publishers of Aberdeen Magazine, Troy and Suzette McQuillen often find their way into these pages. This time it’s their house that makes an appearance here. While it is one of our goals at the magazine to showcase interesting homes around town, quite often home owners are a little shy about letting us in. American Bungalow magazine recently ran a short blurb about the McQuillen house. We felt others might like to take a peek inside this modern arts and crafts bungalow.

Troy and Suzette restored a 1926 home on Jackson Street just off Sixth Avenue. Their appreciation of historic character, rich wood, and an open floor plan led them to architect Brad Ciavarella of Mitchell, SD, who was known at the time to be a preservation architect. They began the discussions with Ciavarella in 2007 and he interpreted their style of living, Troy’s love of Greene and Greene Architecture, and the desire to be able to view the Moccasin Creek from everywhere in the house. The lot chosen for the new home was in the northeast section of Aberdeen, on the banks of the Creek.

Construction began in 2008 with Suzette as the general contractor. Local seasoned homebuilder Joe Gese, Junior agreed to bring the arts and crafts home to life. He and a crew of two built the house in about nine months. The McQuillens moved in January 1, 2009.

The first thing a visitor notices when entering the front door of this story and a half home is the view of the vibrant blue Moccasin Creek. The creek up in the Northeast part of town is relatively clear, has no odor, is full of fish and turtles, and attracts many birds and animals year round. The second thing noticed is the amount of wood used everywhere. Nothing exotic, just custom milled oak. Because of the distinct arts and crafts style, design decisions concerning the details were relatively simple. Troy’s favorite story to tell about the house is that all of the oak trim, milled in multiple widths in three different thicknesses, cost less than the budgeted amount for factory produced trim, which just wasn’t thick enough.

If they could have picked up their quaint, 1926 house and located it on their creek-side lot, they would have. However, the look and character they achieved with similar building materials of yesteryear provided a classic new home that Suzette affectionately refers to as her dream home. Troy, on the other hand, says it is a great house for their forties, and would love to begin to explore something different as they ease into their fifties. 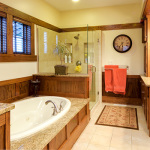 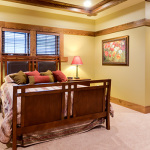 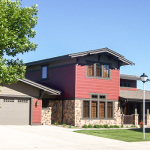 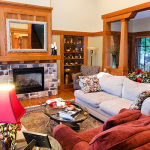 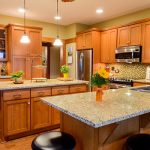