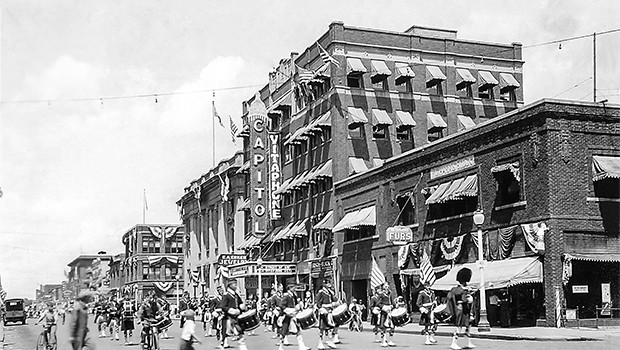 Aberdeen Landmark Survives with Innovation and a Nod to the Past.

Depending on your age or how long you’ve lived in Aberdeen, you may have differing notions of what our Capitol Theatre really is. To many, it’s home to some of the best musical and dramatic theatre productions brilliantly performed by community volunteers. If you’re like me, you remember the blockbuster movies that premiered there, along with the burgundy jackets and bathrooms in the basement. Or perhaps you’ve had the pleasure of viewing Oscar-worthy films on the big screen, now that the Capitol has began showing films once again.

Our Capitol Theatre is known for quality entertaining experiences, how ever you want to define that. Years ago, when arts and culturally minded folks gathered to discuss a long range plan for the 1926 vaudeville theatre, they envisioned a top-notch live community theatre hall that could once again show films after a live theatre conversion. We are all indebted to these visionaries and to the thousands of donors who have made this establishment the envy of many community theatre patrons from South Dakota to New York City.

Interestingly, The Capitol Theatre is not really the official name of the historic downtown building (look up! It’s carved in the stonework). Officially, it’s the “Capitol Building,” which comprises everything all the way up to the bankers and lawyers occupying the upper floors. But the entertainment component is known as Aberdeen Community Theatre, and the film-exhibition portion is known as Capitol Cinema.

Capitol Cinema began running movies in the Aberdeen Community Theatre in 2007 during the first ever South Dakota Film Festival and now specializes in acclaimed, or popular films that don’t fit Carmike Cinema’s target demographic. Truth be told, so many movies are produced each year that Carmike can’t begin to scratch the surface. And when they fill three of their nine theatres with the latest Hunger Games movie, it’s difficult to expose people to other cinematic options.

However, showing movies in a 450-seat theatre in the dead of winter poses many challenges. Artistic/Managing Director James Walker explains that the movie crowds during ACT’s live theatre off time (December to April) are generally small. And heating the massive space for the crowd becomes challenging. Consequently, people tend to feel a bit lonely, and chilly.

So as you hear chatter about Capitol Cinema’s new Digital Theatre, you may think it’s a reaction to small, chilly crowds. But that’s not the case. This new theatre, set to open soon was envisioned back in the day of the master plan. It’s actually located in the space that was built for Woolworths Department store in 1934, and maybe a bit of JC Penny, which was constructed as a stand-alone building prior to Woolworths.

In fact, Walker explains, budgets were drawn up for the Digital Theatre five years ago. Of course, construction costs today are challenging that budget, but the theatre will be completed, as planned. And those plans are oh so cool!

The theatre will seat at least 90 people, will be fully handicap accessible, will have state-of-the-art digital film projection and sound, and could show feature films every day of the year except Christmas eve. It is also being outfitted with “looping” technology, which enhances the listening experience of those who wear hearing aids.

Not only is the projected revenue attractive to ACT, but the movie goers will love the experience itself as it will be intimate, warm, and tasty. Yes folks, concessions will be available in this theatre. Walker explains that popcorn and soda pop (and all food) have not been welcomed in the main auditorium since it reopened as a community theatre. He says if you spill pop in the back row, it runs all the way down to the front of the theatre, leaving a sugar trail 50 yards long. Cleaning something like that between and under chairs is a nightmare. And popcorn tends to stink up a confined space. However, this maintenance issue has been taken into consideration for the Digital Theatre, and folks will be welcomed to purchase concessions and chomp down while watching the movie.

Aberdeen Community Theatre will also benefit from this new space as it can be used as an extra rehearsal stage, and as a place to perform alternative or experimental theatre.

One has to wonder, why after 80 years and six other downtown movie theaters that have come and gone, does the Capitol still shine to this day? Most others that popped up in Aberdeen’s early years were retrofitted into existing buildings. But the Capitol was built as a movie palace, complete with Art Deco interiors. It was definitely a destination, and since it was built specifically for entertaining crowds, it has been preserved by a mindful community. Plus, it didn’t burn to the ground like so many structures back in the day.

Since we’re on the subject, the late Don Artz published in his The Town in the Frog Pond book (Memories Inc., 1991) that Aberdeen had a total of seven theaters downtown after the Capitol opened in 1926. In that year, they were known as Colonial or State, Princess, Garrick or State, Lyric, Orpheum and Rialto. At times, many were owned by the same individual, and they were regularly bought, sold, renamed and ultimately closed. 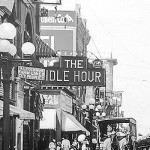 The Idle Hour was added to the Jewett Wholesale building built on the corner of 4th and Main. Later the theater changed its name to the Rialto. 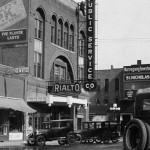 The Rialto was located at 404 S. Main, and this building would eventually be demolished for a new department store known as Bostwicks. 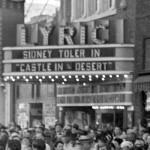 The Lyric Theater was located at 216 S. Main. Many will remember it as the location of Pauer Sound and Music. It is currently a Flea Market. (1942)