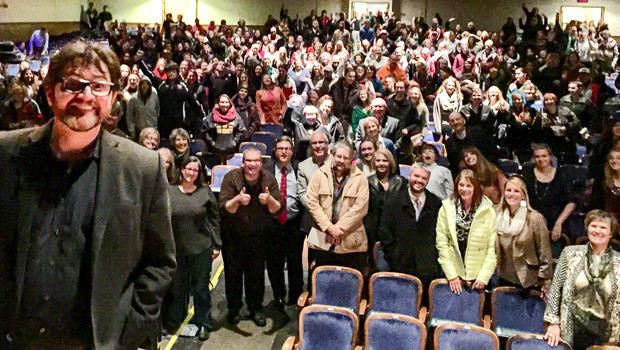 Published on February 24th, 2015 | by AberdeenMagazine

On November 19th, the Aberdeen community and NSU student body came out in force to meet and hear author Ernest Cline speak about his famous novel Ready Player One. The book was chosen to be NSU’s “Common Read” book for this year and was read by 500 students and faculty. Mr. Cline was hosted by the NSU Honors Program directed by Dr. Erin Fouberg, Professor of Geography. Mr. Cline began the evening’s activities with a VIP reception hosted by the Aberdeen American News. He then greeted over 800 fans at the Civic Theatre for a discussion about his book (and movie deal). From there he went to an after-party hosted by the Retrocade Arcade and the Red Rooster Coffee House. Cline’s book is set in a dystopian universe, 2045. The novel is about a competition for a technology mogul’s fortune in which players must solve puzzles about 1980s pop culture in order to win the prize. //