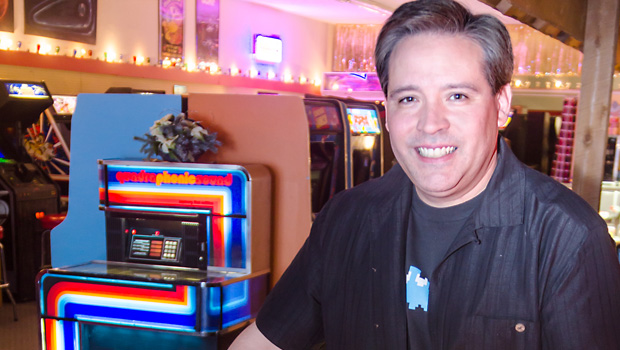 Pacman. Space Invaders. Pinball. For some, these video games are just a memory of their childhood, but for Aberdeen resident Scott Mosey these memories are being revisited. As the owner of Retrocade, a classic arcade located in downtown Aberdeen, Scott has brought classic video games and pinball from the “Golden Era” of arcade games (1977-1983) back to the present. Retrocade has been open since December 5th, 2013, and since then the original gaming prices have stayed the same. “If the game was originally 25 cents or 50 cents that’s what you will pay at Retrocade! I feel it provides a true 1980’s arcade experience,” says Scott.

During the Winter, the arcade seems to have the biggest draw to customers, perhaps because people want to get out of the cold, or maybe they’re attracted by all the flashy lights. Either way, people have taken an interest in Scott’s life-long hobby, but it doesn’t just stop at flashing lights from his vintage video games. You can also hear music coming from an original vinyl record jukebox. “My Passion really includes the entire arcade scene. The sounds, the lights and music; it takes me back to my youth,” explains Scott. Often people playing the games are astounded by the 40-plus machines that line the inside of the arcade. On top of that, each piece has been restored by Scott himself.

“People might be surprised that I bought my first pinball machine when I was in sixth grade with money earned from my newspaper route. I played it and noticed something wasn’t working quite right, so I opened it up to see how it worked. I found the problem and repaired the broken wire and was instantly ‘hooked’. I have bought, sold, repaired, and collected video games, pinball machines, and jukeboxes now for over 30 years.” When Scott isn’t running the arcade, he spends time with his fiance, Roxy, and has a full time job as an Electronics Technician for a local vending company. “I also have a passion for history and love the vintage feel of old historic downtown buildings. Roxy and I were lucky to find this beautiful building for sale and were able to purchase it about 10 years ago. A couple years later, we decided to make my dream a reality and share my collection of 80’s arcade games with others.”

Retrocade is located at 117 South Main Street and is open from from 4-9 p.m. Thursdays and Fridays and 1-9 p.m. on Saturdays.