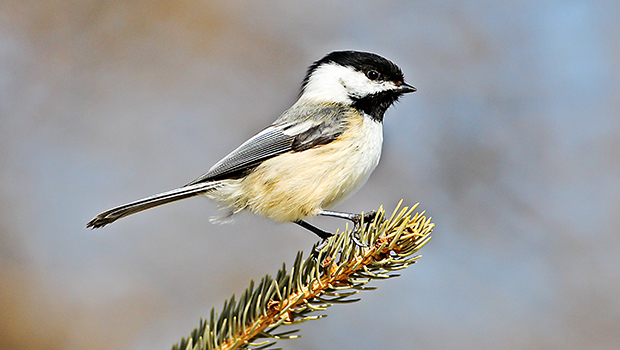 The Northeast South Dakota Birding Club doesn’t let the frigid temperatures and deep snow of South Dakota winters stop them from doing what they love.  Gary Olson, Aberdeen’s NSDB club president says birding is one hobby that is thoroughly enjoyable year round. Gary’s interest in birding began when he was about 12 years old, “I saw a Baltimore Oriole in the trees.” He became mesmerized by the intrinsic beauty of these majestic creatures.

Then later, when Gary met his future wife Cindy, he found out that she too shared his passion for birds. So when Gary retired from 3M after 36 faithful years of service, he decided it was time to get serious about his lifelong fascination. “I had been asked several times, by a fellow bird watcher Eve Larson, if I thought there was any interest (locally) in forming a bird club.” Gary decided to find out. He sent a group email to friends he knew were also avid birder watchers and he received an overwhelmingly favorable response. Thus, the NESDB club was formed. The original members being Gary himself, along with other local birders including: Eve Larson, Dan Streifel, Alyssa Anderson, Nate Roberts, Al and Tammy Olson, Brian and Joyce Kringen, Terry and Geri Jordre, Barry Parkin, Matt Henning, Chad Peterson, Val Veland, Tracy Rosenberg and Cecilia Storley. “These are all the folks I can recall being at the first meeting, but I’m sure I’m missing a few,” Gary states.

The Northeast South Dakota Birding Club goes on regular birding outings, even in the coldest of months. What makes watching snowbirds enjoyable for Gary in the winter months is the chance to spot rare migratory species he’s never seen before, as well as the opportunity to ensure our local species are thriving. “I also enjoy when I think I’ve figured out when or where I’ll see a particular specie, then they will surprise me and appear at a different place or time.” Gary also enjoys noticing how the the number of a particular species he sights fluctuates from year to year.

Gary says the NESDB club’s mission is simply: “To get out and enjoy birding and nature.” They have bird feeders set up at both Richmond and Mina State Parks to provide others the opportunity to enjoy birding. Before their outings, the club meets once a month on the second Saturday, usually from 8 a.m. to 12 p.m. at the Senior Center, and more frequently during migration or peak birding times. The information gathered on club outings is reported by Gary on the South Dakota Ornithologists’ Union website at www.sdou.org.

Gary picks the NESDB club’s outing location. He had been birding several years prior to the formation of the club. As a result, he has learned which birds are likely to be found in various habitats. Locations the birders club has visited so far include: the site of former Blue Cloud Abby, Sand Lake National Wildlife Refuge, Ordway Prairie, Mina, Richmond Lake (Forest Drive), Hartford Beach State Park, Sica Hollow State Park, Lake Hiddenwood Recreation Area, Riverside Memorial Cemetery and the bike path along Moccasin Creek near the public swimming pool. A variety of habitats such as marshes, prairies, forests, and even neighborhood yards have been utilized on club outings. All the bird species seen are put into the SDOU database so there is a historical record that can be used later for reference. It’s important to have a record of birds spotted that are not only out of their normal range but also a record of whether or not the ones normally seen in our area are doing well.

January is when the The Northeast South Dakota Birding Club holds their annual business meeting. Gary sends emails out to the current 20 members. He also posts club information on Yahoo Groups under SD-birds. That list reaches about 477 members. Any new idea or new project is discussed. Officers are elected every other year so it will be a year from now before they elect again. “We collect no dues so projects are run on volunteers and donations.” At this year’s meeting, they will review last year’s sightings and watch a small presentation on Whooping Cranes. “The club was lucky to see a pair of Whooping Cranes on our first outing this past April, so a little history should be interesting for all.” In addition, Brad McDonald (one of the club’s newest members) has written a book about his birding adventures and will be giving a presentation on his birding adventures. The club will discuss possible outing destinations for this year, along with plans to work on some combined outings with the Sioux Falls Birding Club. This year’s annual business meeting will be held on January 10 at 1 p.m. at Northern State University. The building and room will be announced at a later date. Interested parties should contact Gary Olson, Northeast Birding Club President, by leaving a message at (605) 225-5241 or by emailing him at olsonfam@nvc.net. 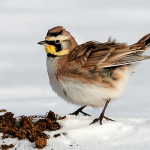 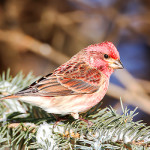 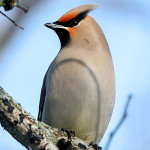 Bohemian Waxwing Seen only in winter in woodlands, residential areas with fruit trees and shrubs 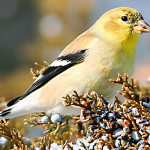 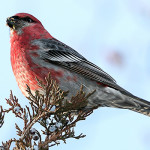