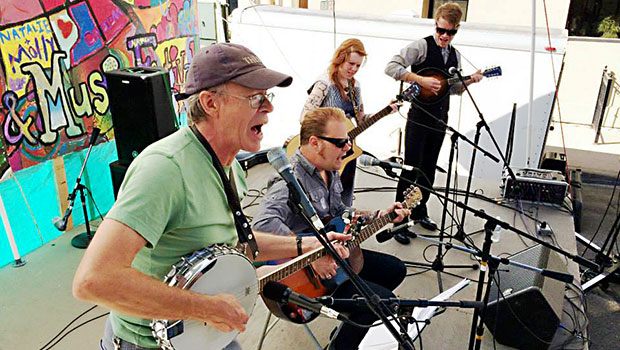 A mug-swinging, feet-stomping good time with the Burckhard family

Communication is key for any musical group, and for the Burckhard family who forms local Irish folk band, The Long Nines, a few words say a lot.

“There’s a lot of unspoken communication between us,” says Pete Burckhard, the father of his own modern-day Partridge Family-esque band. “There can be some head-butting during practice, but never any animosity.”

The Long Nines have been playing together since Pete’s children and grandchild began exploring music, and finally became an official band about half a decade ago.

Eldest son, Joel Burckhard recalls, “It had been something I had wanted to do for about ten or fifteen years, and a few years ago it finally all just came together.”

Joel is referencing when The Palm Garden Café wanted to hire a live Irish folk band for St. Patrick’s Day. His father, Pete, operates the family-owned Burckhard Bakery within the café’s kitchen, and told his son about the event. They later pulled in musical youngest-child Jeremy, and their first gig was booked.

This family of musicians made a seamless transition into bandom. But something was missing from the all-male group, so Joel’s daughter Alexis followed in her grandfather, father, and uncle’s footsteps and became a regular – and youngest – member of the band, rounding them out with her naturally softer side.

“It’s really great to have a woman’s voice in the mix,” remarks Joel.

The Long Nines are regular performers at the annual Celtic Faire, as well as at various local venues hosting yearly St. Patrick’s Day celebrations. So far, they’ve performed exclusively in the Aberdeen area, but the group is looking to broaden their musical footprint in Brookings, where Jeremy recently relocated.

“There are a lot more Celtic-centered events in the Midwest,” Joel explained. They ultimately have their sights on the Irish Fair of Minnesota, the largest free Irish fair in the nation that’s held annually on Harriet Island, across the river from the cities.

In between gigs, Patriarch Pete plays with a few local Jazz and Americana bands, while Alexis plays guitar with her uncle Jeremy in Aberdeen’s rocking Lunar Weight, and Joel satisfies his musical itch in another local band, Paper Airplane Kisses.

To The Long Nines, the culture that accompanies their genre keeps them engaged.

“We play this music because it’s fun,” explains Joel. “Its fun for us, it’s fun for the people listening, it’s just always a good time.“

But it isn’t all fun and games for this talented family.

“We’re also really serious about what we do,” Joel says. “It’s a very important outlet for us. And by taking it seriously, we try to make everybody have a really good time, stomping and swinging their mugs.”

If you’re looking for an earthy, musical taste of Ireland, look no further than a local venue for this Aberdeen original. Be sure to bring your mug of mead and your stompin’ shoes, because you can’t listen to this homegrown band sitting down.