What's New
Veteran Review of Redeployment, by Phil Klay; Space to Think Between the Pages
By Aberdeen Magazine | March/April 2015 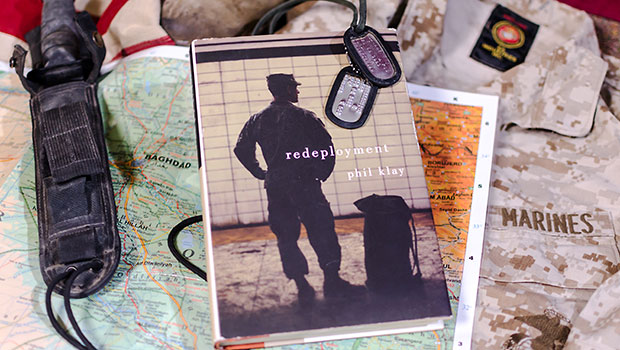 This is a different type of book about America’s wars in Iraq and Afghanistan. While Redeployment is a work of fiction, there are no larger-than-life characters, no heroic sacrifices or amazing feats of bravery. Not to diminish the courageous acts performed by the Navy SEALS in the popular books/movies of American Sniper, Lone Survivor, and Zero Dark Thirty, but this is not their book.

Redeployment is written for the everyman of the American military – that friend from high school who enlisted right after graduation, your coworker’s nephew who joined the National Guard, that guy in your lab group in college who went away to Officer Candidate School between junior and senior year. These are their stories, their emotions, their experiences.

Each story is experientially informed and has the honesty and teeth of non-fiction. The author, Phil Klay, is a veteran U.S. Marine Corps Officer who deployed to Iraq for more than a year in the Anbar Province. His collection of stories seeks to critically engage the reader with America’s war and the veterans returning, rather than allowing civilians to keep a safe distance and get lost in cultural media garbage that exists about war. Klay tells the truth in subtle, honest and impactful ways that let the veteran off-the-hook for responding to the cliché statement, “I can’t imagine what you’ve been through.” Redeployment answers that, and goes one step further.

The title, Redeployment, is fitting, because the stories revolve around coming home and the ironic second deployment from what has become the norm – conflict in Iraq and Afghanistan – to what is now strange and distant – home. Each story reveals the range of veterans’ emotions, from upon immediately returning home, to the struggles faced a few months after leaving the service. As a combat veteran myself, there were aspects of each and every story with which I identified, and that’s what makes this book such an important read. Klay got it right.

Money as a Weapons System

A Foreign Service Officer faces difficulties leading a Provincial Reconstruction Team. They have money to develop local industries and agriculture, but no one is sure what they’re doing or the best way to do it. Their task is further complicated by their ignorance of the cultural terrain of the tribes in the area.

On each of my deployments to Iraq and Afghanistan, I witnessed projects that, while expensive and ambitious, seemed to have little actual affect on the local population and existed to make us feel good. They were expensive albatrosses that the Iraqis and Afghans never asked for or needed, but someone on our side of the war could point to it and say, “Look at what we did.” It was difficult to derive mission and meaning in such an environment.

Unless it’s a Sucking Chest Wound

A former U.S. Marine Officer adjusts to his return to civilian life at law school. He struggles with his identity shift from I am a Marine Officer to I am a Civilian, from a team player in the U.S. military to a singular civilian student who must deal with the public’s negative stereotypes towards combat veterans. He struggles to balance pride in Marine Corps accomplishments with the knowledge that they weren’t possible without participating in and witnessing the evil humankind will do to one another. This is a balance to which I can relate.

Read Redeployment. You’ll be glad you did. But realize it isn’t for the faint of heart. Instead, it’s visceral and honest, and written with an immediacy that demands the reader think, which is something there’s no space to do when you’re deployed. That’s for the redeployment. That’s for the return home.