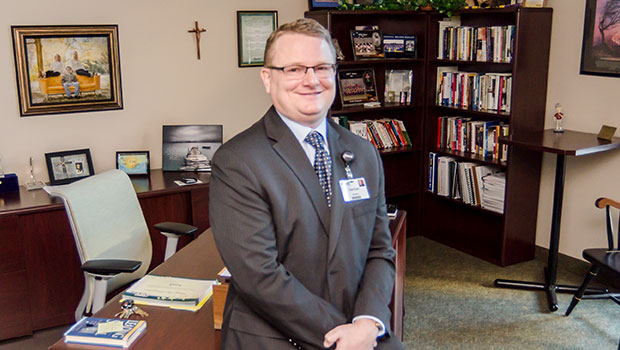 Meeting People Where They’re At

If we must use one word to describe the life, heart and work of Todd Forkel, passionate comes to mind. The young President and CEO of Avera St. Luke’s Hospital is brimming with passion for faith-based healthcare, and recently he told us why.

“When it comes to healthcare, I want to bring in an aspect of faith or a higher power,” explains the Aberdeen native, husband and father of three. “I’ve made that my life goal, and I’ve seen that materialize in the caregiving here. Our faith-based health care is vibrant in this area, and in this country, and it has profound positive effects on those we care for. I’m honored to be a part of an institution that contributes to that.”

Mr. Forkel himself was born at St. Luke’s Hospital, forming a life-long bond with the mission of the Presentation Sisters. After graduating from Central High School, Forkel would later attend Presentation College, where he would study radiology. But first, he felt the need to serve his country.

“I have a heart that wants to serve, but I needed confidence and focus. The military gave me that,” Forkel said of his decision to enlist in the U.S. Air Force after high school. “It was one of the best decisions I’ve made, and I would greatly encourage anyone to do so. It builds strong leaders who continue to give back to their country long after their military commitment. I cannot tell you how great my appreciation is for those who sacrifice for their country.”

After his military station in California, the Aberdonian returned home and attended Presentation College using the GI Bill, which began his career in healthcare and in marriage.

“I met my wife while attending Presentation College,” Forkel smiles, reminiscing. “And the Presentation Sisters gave me my education and my first job. I’m blessed.”

He would go on to get a degree from Northern State University as well, and ultimately would earn an MBA from the University of Mary. Following his education, he became the head of Radiology at his birth hospital, and even served Aberdeen as a city commissioner from 2002-2003, before leaving his hometown for positions with Mayo Clinic and Ascentia Health. But his heart was always with home.

“When the position opened up here for President, I felt guided to apply,” explains Forkel of his decision. “I contemplated it for a couple of days and decided that it was time for a homecoming. And if it all ended today, it’s been an honor to work for Avera. I’m truly humbled.”

Mr. Forkel’s expressed pride in working for the largest employer in South Dakota also extended to his pride in his hometown.

“I’m excited about where I’m from,” Forkel said. “I’m proud to be from Aberdeen.”

But he also thinks we can improve, and make our town even better than it is today.

He explained, “I want us to keep working to make it better. You never want to think that you’re there. You always want to strive to be better. Even though we’ve grown, we should never be satisfied.”