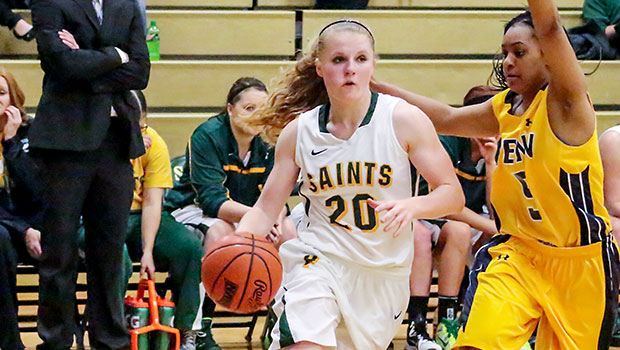 The 2014-15 season has wrapped up for both men’s and women’s college basketball, and this year was jam packed with up and coming underclassmen, stand-out seniors, teams rising up in higher divisions and even a little hardware given out towards the end of the year.

Starting up north at Presentation College we begin our seasonal highlights with the women’s team, who went 8-17 in their second year of NAIA Division II.

Eric Nelson, PC Women’s Head Coach, said, “It’s not easy to go through a transition in which the program moves up a division. Most of the teams we play have been in Division II for a long time and we are only in year two. The girls had to work for everything they got and I couldn’t be more proud of how they played throughout the year.”

Leading the way for the team was Sophomore guard Haley Froelich, who got first team All-Conference honors, leading the conference in scoring with a heavenly 21.4 points per game for the Saints. That’s good enough for 7th in the entire division.

Making the leap into a higher division is a tall task for any team, and PC should be proud of the fact that they are part of an historical move into a more elite division.

Next up is the PC men who went 17-9, and like the women’s team, they too moved up to the Division II in 2013. Senior guard, Jeremy Comer, led the way for the Saints averaging a blistering 19.8 points per game. That’s good enough for 2nd in the their conference.

Head coach Jeremy Reigle says, “We will return some very solid players and the recruiting class is coming together. I’m proud of the way the team kept fighting all year.”

Making our way south, we have the Northern State Wolves women’s basketball team. The Wolves went 26-6, winning their division and conference tournament. Rachel Krogman led the way for the Wolves with double-double’s all year. In fact, she recorded at least 10 points and 10 rebounds in 17 games, ranking her 11th in the nation in that category.

What really stood out for the Wolves was their ability to defend. Ranked number 1 in the country, the Wolves stifled their opponents on defense.

Coach Curt Fredrickson said, “There were three things that I’m particularly proud of that we achieved this season – winning the North Division championship, winning our conference tournament for the first time in 15 years, and advancing to the national tournament.”

Last but not least, we have the NSU Men’s basketball team that went 23-8 this season. Seth Bachand was named to the NSIC First Team All-Conference averaging 13.6 points per game and 7.8 rebounds. Bachand is now a part of the 1,000 point club at NSU. Meanwhile, Tydan Storrusten was named to the Second Team All-Conference, averaging 12.5 with a team leading 3.0 assist and 1.4 steals per game.

Head Coach Paul Sather had this to say about his men’s basketball team, “We learned a lot about overcoming adversity and coming back from big deficits throughout the season. We had several games where teams jumped out to big leads on us… and our guys never quit. At one point, we had 11 games with double digits deficits and we came back to win eight of those games.”

Basketball has always been a big part of Aberdeen’s sports culture, and these teams keep taking it to a higher level each year. The future is indeed bright for both the Wolves and Saints for years to come. //