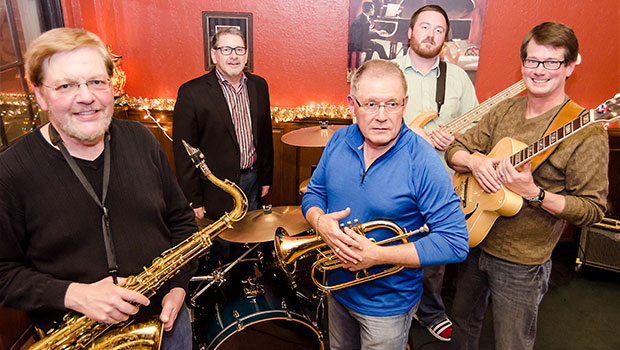 Sparking a Musical Conversation with Jazz

Long weeks at work call for a good way to end them. The members of the Aberdeen Jazz Ensemble all agree that there is no better way to do so than getting together with a few friends, ordering some drinks, and having the conversation that is jazz.

The Aberdeen Jazz Ensemble is the product of five people who have had a mind for music most of their lives. High school jazz band brought Paul Dutt and Dennis McDermott together in the early 70’s, which led them both to pursue careers in teaching music. As time progressed, the group as it stands today gradually began to assemble.

Mike Jilek was a high school student of Dennis’ who was also involved in jazz band, Jimmy Reed was a student at Northern who they had played a few gigs with previously, and Paul met Scott Geffre while student teaching at Central. In fact, Dennis’ first gig with Scott was while he was in college and Scott was in 8th grade, so its safe to say that they have definite musical chemistry.

Each member of the Aberdeen Jazz Ensemble has played with many musical styles over the years, from rock to funk to classical. But what is it about jazz that sets itself apart to bring them together?

Guitarist Paul Dutt believes, “If you play classical or you’re a cover band, the object is to play it as much like the original as possible. In jazz, each musician must bring something to the table.”

No two sets are ever quite the same. The complexity and freestyle nature lets them bounce their music off both each other and the audience to create a conversation of music.

“Much of what we do up there is improvised… just about every time we play we do something we haven’t done in a while,” remarks Paul.

The Aberdeen Jazz Ensemble has already received droves of praise and recognition. From their numerous, packed shows at the Ward Plaza, to their first appearance at Jazz Fest in Sioux Falls last year. Despite this, they say that they still meet people who are surprised to learn that there is jazz in Aberdeen. They attract folks from a number of generations, so this is probably due to simple lack of exposure.

Dennis McDermott says of his time as a teacher, “When you show students this kind of music, it [doesn’t] take long for them to gravitate toward it.”

And with their apparent return to Jazz Fest and their unquestionable talent, it wont be long until others gravitate toward it was well. //