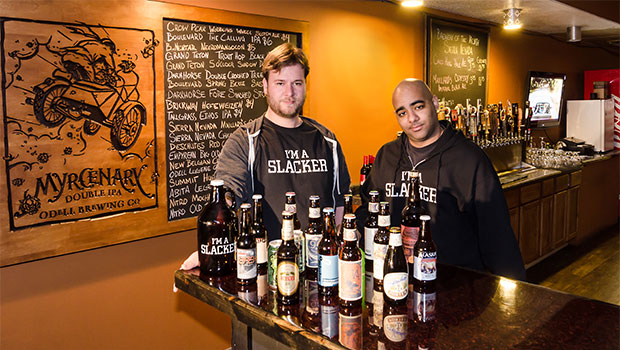 When Jon Hepola and Lamar Marshall met eight years ago, they didn’t predict that together, they’d one day own the most diverse craft beer bar in Aberdeen. And local fans of good brew will attest that the young twenty-something owners of Slackers are the leading craft beer experts in town, a label the two men humbly accept.

“We know what we need to know,” explains Hepola, a born and bred Aberdeen native. “All we did was beer when we were thinking about opening this bar.”

His business partner, Marshall agrees. “We didn’t do anything else,” he says. “We would pick up cases of beer, looking for the next big thing. We were always searching. It’s what we still do.”

And that’s why they say they can put the right beer in the right person’s hand, regardless of one’s experience or familiarity with the wide variety of beers and their flavor notes.

“Often times, we just ask people what they like,” Hepola explains. “If they don’t know, we bring them a couple of samples, and find out what they like and didn’t like about each one. Then we can match them to a beer they’ll like.”

“It’s a process,” Marshall continues. “Craft beer is so broad, and nothing is good or bad. It’s just what you prefer, and we can help you find it.”

The craft beer bar opened its first humble doors in 2011, offering limited taps and a single cooler of bottled craft beers. They offered live music in a small, intimate setting, supporting the local and regional music scene. Their establishment’s popularity quickly grew, and just a few short years later, they had outgrown their space, requiring a move to a larger facility. Quadrupling their bar size, they expanded their taps and bottled selection, and reopened their doors on New Year’s Eve 2014 to a full house before a diverse musical line-up.

“We aren’t a sports bar,” Hepola explains. “We offer live music and a different environment. It’s nice to be completely different.” And his partner agrees.

“We offer unique products, the best selection and a better alternative to what everyone else is doing,” says Marshall. “We opened up pretty early on in the craft beer scene, as far as South Dakota is concerned, and we just do it very, very well.”

Craft beer is relatively young in the United States, emerging in the 1980s and growing in popularity in the last decade. The Slackers’ owners say they thrive on the creative side of craft beer, with its unlimited new ideas and products.

“Craft beer challenges the pallet,” Marshall says, discussing Imperial Pale Ales and Sours. “Experienced craft drinkers can tear them apart and get all the flavors after a glass or two. But the industry will keep pushing it, making it more intense. And when it can’t get any more intense, they’ll move on to the next thing. It’s always changing and it always will. That’s what craft beer does.”

Hepola suggests that the next trend in craft beer will be reviving the ancient dead styles with barrel-aging and smoky wheats, combining sours with other flavors.

“No one has seen this for 150-years in the states,” he explains. “Everyone’s reviving an old style, and we’re ready to offer them to the community.”

Recently, they aged a barrel of La Folie in their basement for half a year before offering it on tap.

“It was popular. Our customers loved it,” Marshall says. “We may experiment with aging longer in the future, as long as our customers enjoy what we offer.”

Citing a solid, receptive community full of great people and talented musicians, the two beer experts say they will continue to strive to grow craft beer locally in their downtown live music venue.

“Aberdeen is a fan of great beer and the arts. That’s why we’re here. We love it here.” //