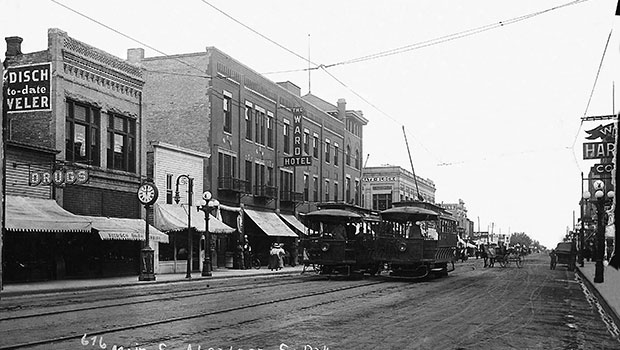 Progressive Aberdeen invested in an electric streetcar system and had it operational by 1910. This photo was probably taken shortly after that. The streetcars connected NSU, Downtown, the Highlands, and eventually went out to Wylie Park in the summer months.

This view may be confusing to many because there is nothing in this picture that is still in existence today, other than the road itself. This was taken on Main Street, on the 100 block, looking north. You can see the Ward Hotel, however, this particular version burned and was replaced with the one we still have today. Even the building (Hatz Block) just past the Ward is gone as well, replaced by the Wells Fargo Auto Finance building. The streetcars would hang out in this location and change conductors.

This photo is either from the Dacotah Prairie Museum or my personal collection, as my great grandfather managed the streetcar system until the automobile caused its demise in the early 1920s. // –Troy McQuillen