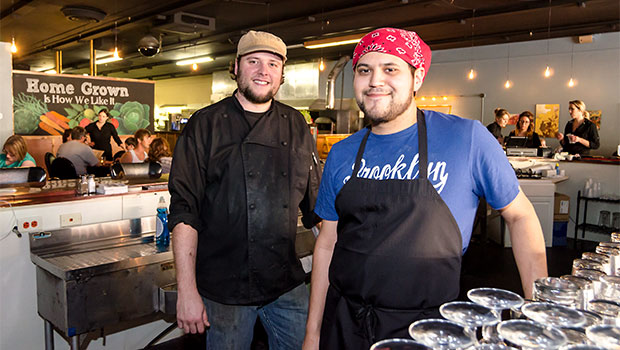 Published on September 2nd, 2015 | by AberdeenMagazine

A Taste of Innovation

The Brass Kettle Brings a New Taste to Aberdeen

Starting your own restaurant is not something that anyone can just do. But if anyone can do it, it would be Brandon Johnson and Nick Howell, the owners of Aberdeen’s newest dining experience, The Brass Kettle. With over twenty-five years of experience in the business between them, these two chefs knew that starting their own restaurant would be the best way to do what they love, the way they want to do it.

Nick Howell believes, “We knew this would be the perfect opportunity to let our culinary skills shine and bring something to Aberdeen that they hadn’t had before.”

As the first chef owned and operated restaurant in the area, most would agree that this is a bold idea. Luckily these two both have the experience to back it up.

Brandon’s experience began as dishwasher at Minerva’s 10 years ago. Already quite the foodie, he learned to cook at the former Scotty’s, now Daddy’s, and later brought his talents to all the local hot spots such as the Palm Garden, Bully’s, and even Wild Oats, the former owner of their current location.

For Nick, his love of cooking began even earlier in the kitchen with his mom and grandma.

“I was a Food Network nut, not so much Cartoon Network as a kid” This talent was recognized all over Aberdeen, from Minerva’s to Flatlanders where he was the Exec Chef for a time, to Palm Garden where he was the kitchen manager. The experience between both of them brings with it a passion and skill for making incredible food at a competitive price.

The name of the game at The Brass Kettle is hand-made. Everything they offer was a labor of love that Brandon and Nick worked tirelessly to create themselves. The level of involvement ranges from the recycled wood paneling on their bar, to their hydroponic vegetables. The veggies are grown right on site, the first restaurant in Aberdeen to do it.

“We wanted to make everything from scratch, so why not just grow our own produce from scratch as well?” explains Brandon.

In addition to being both fresher and cheaper overall, on site grown produce also creates a level of convenience.

Brandon remarks, “If we want to say, use tomatoes on our burgers year round, there’s really only a small time of the year where a tomato is even worth it. With hydroponic tomatoes, we can serve them all year round. That’s true of any kind of produce.”

When something is described as unique, it can usually be paired with a number of other words as well, such as innovative, new and special. For these two chefs, unique means a golden opportunity to create something of their own, something most Aberdonians have never seen. //