By 1909 Aberdeen’s population had risen to 12,000 (a bit shy of Sioux Falls’ 14,000). In that year, a banking newcomer was about to substantially impact the architectural landscape of downtown Main Street. The institution was Citizens Trust and Savings Bank, and they were in the midst of constructing our first high rise. 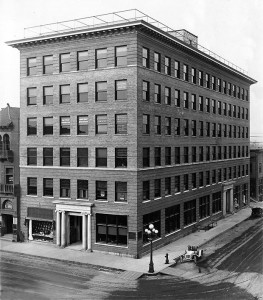 The new six-story Citizens Bank building towered over the intersection of Main Street and Second Avenue. It opened in the early spring of 1910.

The Citizens Building was the largest and most modern building between the Twin Cities and the west coast when it opened in the early spring of 1910. The community was skeptical that a six-story building could be developed in Aberdeen, but the bank proclaimed, “six stories or nothing!” The size was planned because Aberdeen was booming and many of the other small commercial block buildings had simply become too small for our swelling town.

The building was designed to occupy 50 feet of Main Street frontage and 142 feet of Second Avenue. 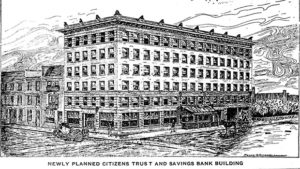 The interesting aspect of this drawing is that it depicted an architect’s vision for the building, yet, because of other buildings, would never have been possible to view it from this perspective. It seems to favor the Second Avenue side as the main façade, complete with canopied basement entrance. The entrance was built, but not as grand as depicted. This drawing also shows “shell” embellishments atop the parapet, but those didn’t appear to make it onto the final building. The architect was F.H. Ellerbee from St. Paul.

Early plans for the building called for modern amenities of its day. Two electric elevators would travel the six floors (plus a usable basement level), and most importantly a soft water system would supply treated water to the whole building. The basement offices would be lit with skylights in the sidewalk and a basement freight entrance would be on the avenue side. The actual bank would be on the corner while stores would be across the hall to the south, and in the back on the avenue side.

In looking at the architect’s rendering one can see the grandeur that was envisioned. I can find no pictures showing the “shell” accents on the roofline, but there definitely was a broad overhang capping the building. If you stand back and visually dissect the brickwork, you can make out the three horizontal patterns of brickwork as depicted in the drawing. 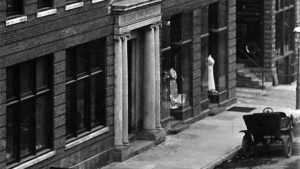 Two stores were designed in the back on the avenue side. Ivey’s for Hair now occupies one of these spaces.

The Citizens Building has gone through a lot of “remuddling” over the years in multiple attempts to modernize specific entrances and storefronts. Fortunately the Second Avenue entrance is pretty much intact in its original state.

As with any Main Street building, the Citizen Building has potential. It obviously needs a lot of work, but any old building does. There are lots of office spaces vacant inside the building as well as in our entire historic downtown. But, the best way to look at it is, it’s not a lot of vacant spaces, it’s a lot of opportunity. //