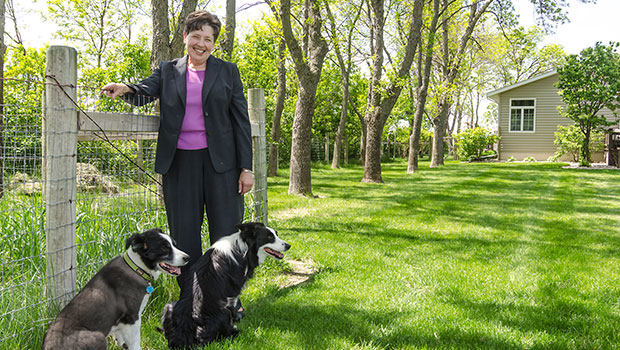 From the Convent to the Conference Room

Since 2012, Dr. Margret A. Huber has been the esteemed President of Aberdeen’s own Presentation College. It’s a lofty position, and one that had a long and interesting road leading up to it.

Growing up in western Pennsylvania as the oldest child in a very Catholic family, Dr. Huber knew that she wanted to answer the call of the church at a very young age. After graduating from Marycrest Girls High School, she went off to college and joined the Sisters of Divine Providence at the same time, where she stayed for about twenty-five years. It was there that she got her push into the field of higher education.

“I had always wanted to be a teacher, that was my seven year old image of what the sisters were, but every year as I went along I got more and more knowledge of higher level teaching. I wanted to teach grade school, then high school, but when I got into college I realized I really wanted to work at the college level.”

She recalled one day after she got her Baccalaureate, when she was walking around doing “nun stuff”, when a superior came and asked if she’d like to get her PhD, come back and work at LaRoche College. A divine opportunity if there ever was one. She went off to the University of Michigan to earn her PhD in higher education. When she returned, she worked at the college for a couple years as Executive Vice President before becoming President at age thirty-one.

In 1992, after 12 years as President, she felt it was time to move on; not only from La Roche College, but from the order as well. After a discernment retreat, she decided to leave the community behind and focus on a career in higher education. After taking Presidency positions from colleges in both California and New Jersey, she finally arrived at Presentation. After seeing an ad for a position as president of Presentation, she became intrigued and flew out for an interview. After arriving at the airport, she rented a car and headed to the hotel.

“The next day, I drove around the area, had my interview and I thought ‘I could live here forever.’ It was just really beautiful and it reminds me of where I grew up in Western Pennsylvania.”

Since coming to Presentation in 2012 Dr. Huber has made a number of strides in pulling the college toward what she calls the “benchmarks of higher education.” These include everything from adding social science programs, adding physical spaces, such as the Wellness Center and Java City, and building their relationship with Roncalli.

“Now I’m just looking at the horizon wondering what could this college be?” With her experience, guidance and her love of wholesome education, it’s safe to say that Presentation College is in good hands. //