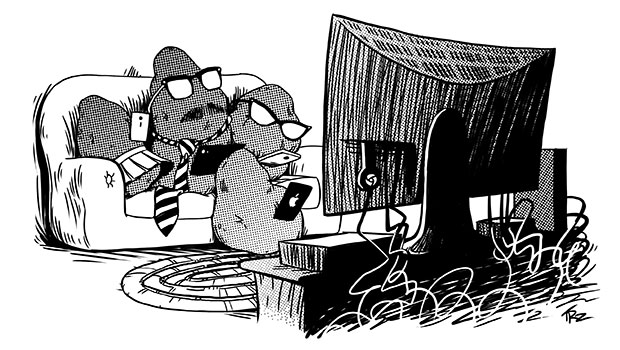 If I died and came back as a vegetable, I’d be a couch potato. After all, the couch has the best view. But did you know that nearly 1 in 5 living room couches sits opposite a television sans cable.

According to the market research institute GfK, almost 20% of households have cut the subscription cable cord. In addition, companies like Time Warner, Comcast, and Direct TV have lost hundreds of thousands of subscribers in the last two years.

It’s no surprise why, quite frankly. Viewers want entertainment on their own time. They want the ability to slowly consume a television series over several months or binge watch an entire season in one setting, and viewers are willing to pay for it. “I’m a paid subscription gal!” says Aberdonian Angelia Schultz, “Netflix, Hulu+, HBO Now, Amazon Prime Streaming. I love commercial-free watching.”

Plus, online streaming services such as Netflix and Hulu have some of the best new entertainment available! Netflix has House of Cards and Daredevil; Amazon Prime has Alpha House with John Goodman; and there’s Crackle.com where Jerry Seinfeld interviews comedians in cars while getting coffee.

Ultimately, streaming services are affordable! “I use Netflix with rabbit ears because I am cheap.” explains actor and South Dakota Film Festival attendee Arin Winger, “I don’t let the TV dictate my schedule. That’s why I have a wife and four children.”

In contrast, NSU Director of University Relations Greg Smith uses cable TV about 70% of the time, but admits “Cable is expensive and the selection is actually not that great in our opinion. If our TV were internet capable, we would probably increase our use of streaming.”

Local 30-somethings Sara and Greg Blair have ditched cable altogether. Sara explains, “Avoiding child-based marketing is wonderful. I love when we travel; our kids don’t understand why there are toy commercials interrupting their cartoons.”

So it’s settled. Everybody can cancel their cable subscription tomorrow. Or maybe it’s not that simple. Many of you may be asking How will I watch my favorite sports teams? Or How will I get my local programming?

The Big 3 (NBC, CBS, ABC) may be prehistoric when compared to streaming services, but they do offer the local content that Netflix can’t, which is one big reason cable subscribers are hesitant to cut the cord. Undoubtedly, not everyone has good luck with digital antennas. However, local news stations are releasing stories online, sometimes before they air, because they know the “news” moves faster than the TV schedule. So, at some point, accessing local programming online may not be an issue.

Which brings us to the topic of sports. “I need cable for sports!” says Aberdeen Magazine contributor and sports enthusiast Andy Hansen. “In my opinion, live sports are where the a la carte and streaming services fall short.”

But consider this cliché response. There’s an app for that! Sling TV lets you stream more than a dozen channels – including ESPN – of live television without cable. If Sling TV ever develops DVR capabilities, users could watch their live sporting events for a fraction of the cost.

So, perhaps we’re at a tipping point. Perhaps our future generations will wonder why our TVs made demands of our schedules instead of the other way around. Heck! If you’re thinking of making the switch, now might be the perfect time. You can avoid an entire year of political attack ads.

But at the end of the day, just because we can live without a cable subscription doesn’t mean we must. Some folks still really enjoy the live TV viewing experience. And they enjoy the suspense and water cooler conversation that weekly cliffhangers provide. Indeed, 20% of American households being without cable indicates 4 out of 5 households continue to subscribe. As we all know that 4 out of 5 of something is usually enough to sell gum. My only hope is that the gum is potato flavored.