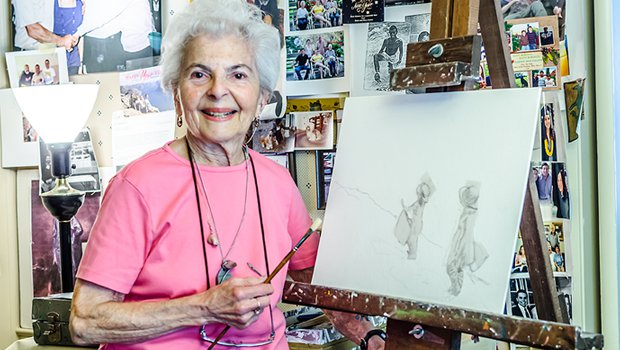 Aberdeen resident, Gail Pickus, has a little known talent. It happens in her kitchen studio, surrounded by the natural light cascading in from her bay windows, while her companion dog Shag, naps at her feet. This is where she paints.

Art was a part of her life from the very beginning. She was born in Chicago to a commercial artist father Boris Hamilton, and a ballet-dancing mother, Avery Hamilton. From a very early age Gail and her sister Joan, were always drawing, painting, or dancing. She remembers fondly as they grew older they attended art classes at the Institute of Design and the Art Institute of Chicago, and ballet classes at a local studio.

When it came time for university, Gail followed Joan, who was two years older, to the University of Iowa where they both studied art, her sister a printmaker and Gail a painter. Art school exposed her to many different kinds of art making and painting, oils, watercolor, copper plates, wood, and many others.

She left Iowa after a year and a half when she married her Aberdeen native husband, Herman “Bud” Pickus. They later moved back to Aberdeen where Gail finished school at Northern State University, raised three boys, and continued to paint. While she wasn’t chasing after three boys, Gail loved to teach art classes to her neighbors on the front lawn of their home. This is what kept her love for art alive and how she started painting portraits for people.

The story behind the picture is what inspires her to finish a piece. Like her current work in progress of two little neighbor girls playing in their grandparent’s yard. As Gail puts it, “ the funky little girl” is wearing her pajamas in the front yard while her older sister the “good little girl” follows behind in a sundress.

When asked to do a portrait for a friend or family member she often takes a photo for reference and “tidies it up” by replacing the objects people are holding with something more pleasant or putting the figure in a new background setting altogether. A lovely painting she did of her late husband (at left) is a perfect example of this.

“He loved to golf,” she said, “and would often come home and drink a beer to unwind like most men.” In the painting she turned the beer can into a juice glass. Another challenge she loves about painting is getting a different subject she hasn’t worked with before, such as a house. After responding, “I can do that,” to the request of her friend Erin who asked if she could do a painting of a house they once owned, she thought to herself, “can I do that?” She loves to test her abilities with a paintbrush and canvas.

She finds that the sense of accomplishment and joy she gets from finishing a piece is her best work. “I am pleased when I can fulfill my own concept with what the person wanted or with what I did.” //