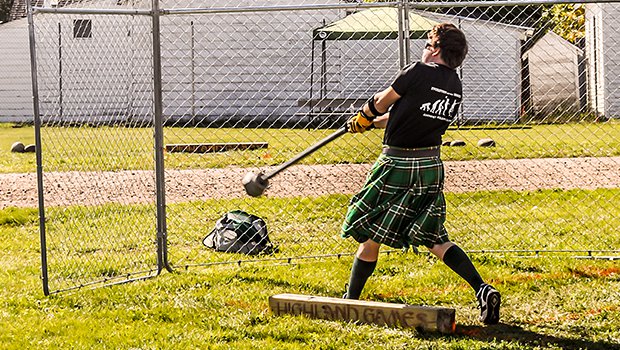 A Complete Look at the Aberdeen Celtic Faire and Games

There is an old Gaelic saying, “A good start is half the work.” That rightfully describes what residents in Aberdeen know as the Celtic Faire. I sat down with Jean Taylor, President of the faire to talk about how the faire was forged and what to look forward to this year. What started out as a dream eight years ago between four individuals has transpired into a festival of educating and entertaining the community on Celtic culture and traditions. Taking place at the Expo building September 19 and 20 with a charge of only $10 a day admission (ages 13-17 is $5, under 12 is free admission) this includes entrance to the games, music and other entertainment the faire has to offer.

A staple aspect of the Celtic Faire is the Highlander Games. Traditional Celtic games held at the faire include the Caber Toss. In this event athletes take a trimmed and tapered tree trunk about 16 to 22 feet long and 60-180 pounds in weight. Raising the caber in the palms of their hands, then proceeding to run with the caber and throwing it so it goes end over end. Stone Put is also played at the faire, which is very similar to modern day shot put and is believed to have gotten its origin from the Celts. Unlike common sports today, athletes in these games only compete with themselves, training all year to better their scores, and not distracting themselves with how others are fairing.

Aside from the games at the faire another staple aspect of the Celtic Faire is the music. Performing this year is The Twin Cities Metro Pipe Band, who consistently perform at the Highland Games in the Midwest area each year. Headlining, and also from the Twin Cities is The Hounds of Finn, a three-piece high-energy folk rock band. With a passion for preforming, they are inspired by Celtic, Americana, and folk styles. Performing with them is Maggie in the Meantime, founded in 2009 in Sioux Falls.They bring of blend of ballad, folk, and storytelling appeal to any group or setting. Adding to the faire, local talent The Long Nines play a traditional mix of Irish drinking songs, pub music, along with covers of the Pogues and Flogging Molly. Last, but not least is Mikko and Friends: The Irish Experience. Spending his life to music, “Mikko” comes to share his stories of traveling in Ireland and the surrounding area, along with playing old Irish favorites.

Accompanying the musical performances at the faire will be the McDonald School of Irish and International Dance, established in 1992 by Maureen McDonald-Hins an Adjunct Professor at Minnesota State University of Moorhead. If music and dance is not your cup of mead though, there are a variety of other events such as the parade of Celtic Pets, where tons of Celtic breeds of dogs, Highland cattle, Clydesdale horses, and sheep will be showcased. There will also be a Wee Lad and Wee Lass contest for kindergarten children in the community. They will be promoting the Celtic Faire throughout the year with a ride in the NSU parade and other activities.

It takes a lot of volunteers, fund-raising and community supporters to put on the faire each year. Continuing in the cycle of giving, Finnegans Beer, Empty Bowls and Celtic Faire have partnered together and are offering a one-of-a-kind mug for $15 with one fill of Finnegans Beer. The proceeds will go back into the community for feeding the less fortunate. Two years ago there were an estimated one volunteer for every hundred faire goers. If you’re interested and want to lend a helping hand the faire is open to volunteers, you can contact Jean Taylor at 605-380-5828, or go to www.nesdcelticfaire.com, for more information. She would be more than grateful to have more volunteers this year. If you’re still on the fence about coming out because you know nothing about the Celts remember, if you don’t try anything new you won’t learn anything new. //

Learn more at the NESD Celtic Faire and Games website.