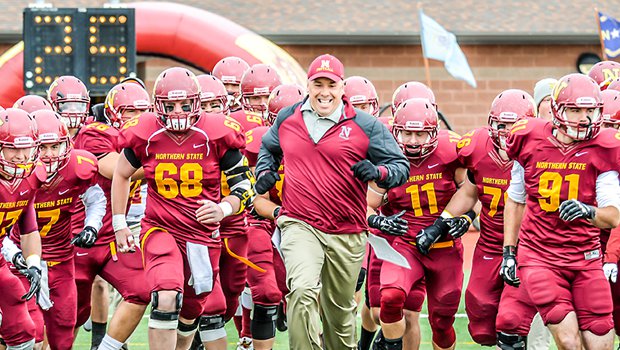 Gypsy Days is a homecoming tradition that Northern State has continued through 99 years and are coming up on their 100th anniversary. Many believe the apex of the homecoming is the football game, and that’s exactly what were going to talk about, in part. But who is in the middle calling the shots for Northern Football and how does he feel about Gypsy Days?

Tom Dosch is in his fifth season with the Wolves. Coming fresh off his NSIC coach of the year award after taking his team 8-3 which was their best finish since 1999. It doesn’t stop on the field when it comes to accomplishments either. Dosch’s 2014 team was a part of the student athletes with record setting GPAs, and his radio ads must be working because they had a record breaking youth camp that year too. The team is even giving blood at record pace and it’s not on the field! They had a record-breaking blood drive last year too. It seems that since Dosch has arrived on campus that things have been looking up in multiple aspects.

While all of this has been happening on campus, coach hasn’t forgotten tradition. A couple of his favorite Gypsy day events include the Royal Order of the Gyps band, the burning of the N and coronation. When asked what is Gypsy Days to you, he responded, “It’s a great part of the history and tradition of Northern. Unlike other places, it is a very big part of campus year round. A cool tradition, for sure.” But of course the more important event for Dosch happens over on Swisher field.

Going into this years homecoming game Dosch is 2-3 which is respectable in his first five years at a program. Especially with the amount of pressure related to homecoming. We’re talking a much bigger home crowd with alumni that really want to see a win especially if they don’t get out to see the team that often. But when asked about the homecoming game Dosch explained, “Every single game is 1/11th of our season. The most important game of the season is the one we are playing that particular week.”

For Dosch and the Wolves the time leading up to the game is just as important as the game itself. I asked what type of preparation comes with a homecoming week football game? His reply seemed to revolve around consistency. “It’s the same as every week for the players, I might have a couple of things to do during the week, but I like to keep as normal of a routine as possible for the staff and players.” Last year the preparation must have been very consistent as they dismantled Minot State 42-14.

Thinking about the opposite side of that exchange, it has to be incredibly hard to go to another teams’ homecoming, because of the amount of support from the home crowd. “We have the best fans in the NSIC. They are a huge part of the atmosphere at NSU, and a big reason why this is a special place. The NSU marching band, our students and crowd make it a fun atmosphere to play in front of; there are several road games every year where we have more fans than the home team,” said Dosch.

This year the Wolves will be facing USF on homecoming which sounds like it’s going to be a great game as both teams are coming off of winning seasons. That combined with the 100th Gypsy Day crowd should turn out to be a great atmosphere. So get out there and show the Wolves some love, by being a part of history this 100th Gypsy Days! Go Wolves!