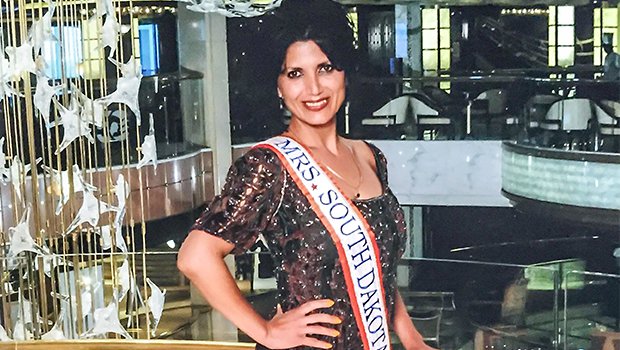 There She Is! Mrs. South Dakota

They say beauty is only skin deep. But in some cases, such as with Karine Pogosyan-Myromoe, the current Mrs. South Dakota, beauty can exist from the skin to the soul.

Karine Pogosyan-Myromoe was born in Armenia in 1974. In 1992, she and her parents immigrated to the United States and lived in Palm Springs, California. From an early age she loved modeling as well as acting, taking a number of modeling jobs while going to school in Hastings, Nebraska, as well as many charity runway events back in Palm Springs.

After moving to North Dakota, Karine entered her first pageant in 2007, called Beauties of America. She was apprehensive about joining at first, due to the fact that she was juggling a full-time job, an unpleasant divorce, a Master’s Degree and a daughter. However, she decided that pageantry might be just the outlet she needed for such stress. After winning the North Dakota title, she moved on to Nationals in Myrtle Beach, SC. Despite not taking the crown, (which went to Texas, unsurprisingly) it was still an amazing experience for her.

It wasn’t long after this first pageant that the director of the Mrs. South Dakota pageant, which was happening that April, approached her. She recalls, “I did not get back to them until the week before, I was in a dress I borrowed from one of my girlfriends, but by golly I entered it and won Mrs. South Dakota 2015.”

Karine has always lead an active lifestyle, but since winning Mrs. South Dakota she has been given a platform for a number of public speaking events to talk about a subject she deeply cares about and has a personal connection to, domestic violence. As someone who was herself a victim of domestic violence during her first marriage, Karine understands the emotional and mental toll it can take and seeks to help other victims who struggle to survive and are scared to leave.

“With my story I want to inspire people and give them courage to leave and pursue their dreams… I realized the only way [for me] to survive was to get out and build a new life for myself and my daughter.” Since winning the crown Karine has used her exposure to speak at charity events and bring awareness and support to the problem of domestic violence; and she has proven to be quite skilled at it, tailoring her talks to everyone from full grown adults to children as young as three.

In addition to the public speaking events, Karine also spends her time volunteering for domestic violence based charities such as the Missouri Shores shelter in Pierre and Safe Harbor. She also organizes her own fund raising to support shelters and organizations that “open their doors when people have nowhere else to turn.”

Clearly having a lot on her plate is the opposite of a problem for Karine; in fact she plans on redoubling her efforts by amending domestic violence laws. She knows all too well that she was fortunate to have made it out of her situation alive, but for many cases help comes too late. “My goal is to change, through legislature or lobbying, the law [from reactionary steps] to preventative.”

Whether she’s leading a talk or wearing a sash, our current Mrs. South Dakota shows that she can do good work, and look good doing it. //