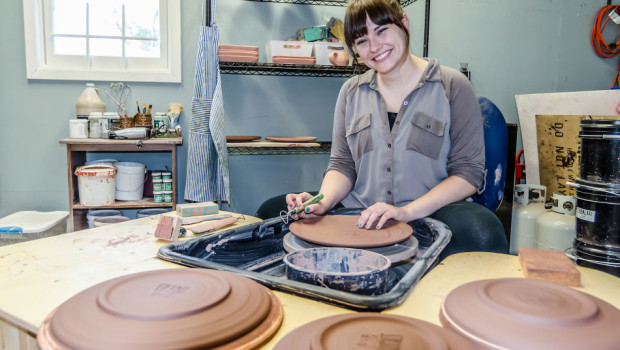 Published on December 22nd, 2015 | by AberdeenMagazine

Local artist, Katie Schreurs, forms pottery and her own business

“I like to build things, make things.” Katie Schreurs is a 24-year-old local artist and business owner. She is the owner of Kat Ceramics, where she creates and sells handmade pottery. Schreurs graduated from Northern State University with a degree in Art and now uses it to do what she loves. 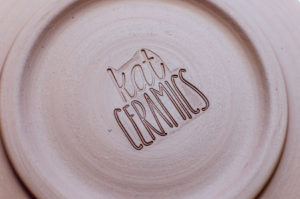 Despite her business not being her only job, she works diligently to fulfill all of her ceramics requests. She never thought that she would be able to do her pottery as a career this early in her life. Schreurs bought all of her equipment including her kiln (a type of oven) and her own pottery wheel. The magic happens in a garage stall, an uncommon but worthy spot, that she rents from a friend.

“A friend of mine was looking for a dish set, and said, ‘If you make me this dish set you can set up in my garage.’” The business is a little over one year old and still developing, “it is always a process.”

Someday, she aspires to have Kat Ceramics be her one and only day job; for now, she does work for local businesses and also takes special orders. Shreuers has been shaping and forming since she was in high school, but she explains that it was in college that she really got into it and learned the most. She does enjoy other forms of art, but pottery allows her to get hands-on and build something 3D. Her most popular items are her license plates trays and mugs. She explains that many artists use license plates in their work, but each artist forms something unique and different. The idea for license plate mugs actually came when a friend said that she had seen a mug in Montana, and  she asked Katie if she could make something using South Dakota plates. She usually makes smaller pottery like mugs, trays, and dishware, but hopes that soon she will be able to create bigger pieces.

Schreurs will be busy this holiday season with an art show in Selby, a booth at Winterfest, and many gift requests. Having two jobs, she does not have a lot of spare time, but when she does she still spends time relaxing and making small items in her studio. Schreurs, still young, knows that she still has a lot to learn about both running a business and creating pottery. Kat Ceramics, although still in its humble beginnings phase, has great possibility. // – Hannah Loefke