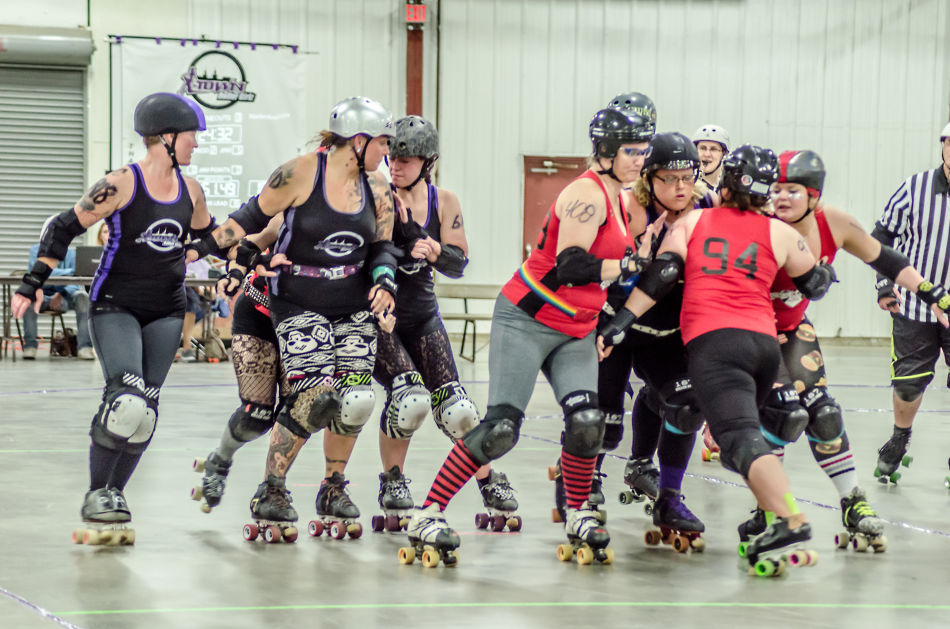 Women’s Roller Derby makes its push in the Hub City

When I entered the expo building on Saturday night I came across something I had never seen live. Multiple women circling a track dressed in their team’s colors waiting for the whistle to blow and begin what can be described as beauty and brute force all in one. As the Jammers begin to find their way around the opposing team it’s almost like watching a running back find open space on the football field. Weaving her way through blockers gracefully and getting some help from her teammates shear force. Nancy Appl aka “Applicious” finds an opening and makes her way all the way around the track scoring points for her team. Now it’s time to do it all over again.

The A-Town Roller Girlz have about four home events a season along with a lot of road games including the Rumble in the Valley Tournament. They also host a kids Halloween party each year.

Not only is Roller Derby gaining more and more popularity here in Aberdeen, the Roller Girlz are finding talented individuals leading to some successful seasons.

“We have had our fair share of wins this year. We earned our way into the Consolation Championship game at the Rumble in the Valley Tourney hosted by Forx Roller Derby in Grand Forks, ND! We had a successful recruiting event after the Fair and we are currently working on training our ‘Fresh Meat’ so they will be ready to roll next season,” said Atherton.

Even when numbers were low they dug deep and got a victory with only six girlz on the team! “These Girlz truly fit the definition of team on and off the track! They are like a family,” added Atherton.

The Roller Girlz become such a family that even nicknames sprout up for each member of the team, something that has become very common in the Roller Derby community. Names such as Crimson Splat-Her, Nicki Heat, StackSmasher, Icky Thump, Robyn Banks, Ground Pounder, BludVayne, and Glammer Ram-Her just to list a few. Even the Head Referee has the nickname Colonel Angus. These type of nicknames definitely give a little personality to the organization and the team.

Not only do these players bring a great sport to the community for entertainment and competition, but the A-Town Roller Girlz all volunteer for various things in Aberdeen’s community. They also donate all of the proceeds they earn back to local charities in the community. Some of those charities include: Aberdeen Area Humane Society, Kids Against Hunger, Brown County Relay for Life, Safe Harbor, Storybook Land, Mother’s of Angel, and the Boy’s and Girl’s Club.

Overall the A-Town Roller Girlz started from the ground floor and have worked their way up to help their community and bring in some great competition to Aberdeen. Just recently they were even nominated for an Abby Award. The future truly does look bright for this organization.

For anyone interested in being a part of the derby or even coming to an event you can visit atownrollergirlz.com or if you have questions about what the derby is all about you can visit wftda.com for rules and regulations. // – Andrew Hansen