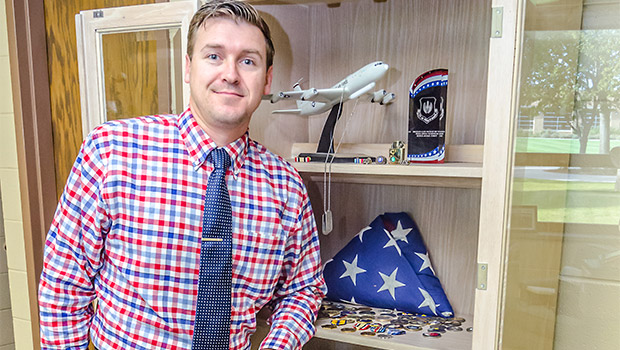 Veterans Day is coming up soon on the 11th of November. For many of us, it’s a time for cookouts, parades, and of course honoring our current and former troops. But for those of us who have not served, we may sometimes find ourselves wondering what it truly means to be a veteran in America. Does Veteran’s Day mean more to our service members than just barbeques and a day off? And if so, how much? We looked to Presentation College’s Director of Marketing and Public Relations, Tim Beckham for some insight.

Tim joined the service shortly after the 9/11 terror attacks and was out of boot camp by November.

Tim recalls, “I had graduated high school, kinda thinking about going to college, and after September 11 I decided I wanted to serve the country.” From then he spent eight years in the Air Force as a Public Affairs Specialist, basically a photojournalist and public relations person, eventually achieving the rank of Staff Sargent. He spent three tours overseas, two in Iraq and one in Qatar.

Having family who had served in the military, Tim had always been a very patriotic person, but after 9/11, boot camp, and experiencing first-hand what members of the military go through every day, it gave him a new understanding and appreciation for the sacrifices they make. So have Tim’s Veteran’s Day experience changed from before he became a veteran to after? Well, yes and no. He still spends it how he did before, getting together with friends and family, having a barbeque, and enjoying the day. But it’s also a time to reflect, not only on his time in the service but the times of everyone else who has served, including his wife whom he met in the Air Force while in Turkey.

While deciding to join the military is a good and honorable decision for anybody to make, it is also a very big decision that some people might be apprehensive about.

When asked what he would say to someone who was thinking about military service, Tim replied, “I wouldn’t want to speculate on everybody, but for me it was a great decision. I met my wife in the military, I got my college paid for, I got to see a lot of the world, and I got to serve my country… I think it’s a great experience and I wouldn’t trade it for anything.”

So enjoy the parades, bring the kids; eat great food at a barbeque with family and friends. It’s these things that our troops have fought so hard for after all. But make sure to remember the many who have fought and the many who have fallen, and if you can, take the time to thank one of the many who have served our country because there’s no doubt, our lives wouldn’t be the same without them. // – Sean McCracken