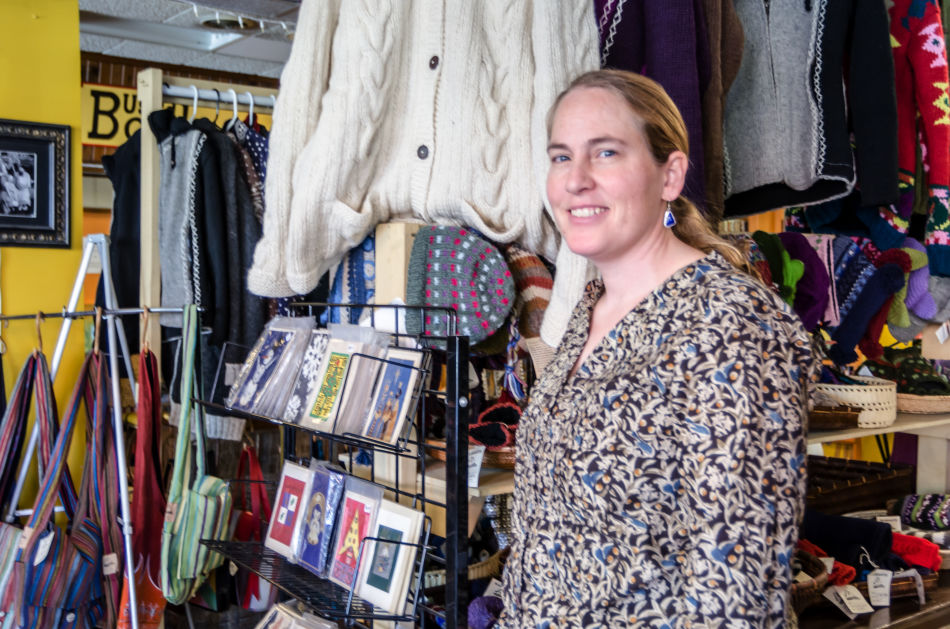 Kileen Limvere is a compassionate soul, always rooting for the underdog, and always there to offer a helping hand. Kileen co-owns the Red Rooster Coffee House, with her brother Dan Cleberg. The coffeehouse is a home to many, from hurried businessmen to caffeine-needy college kids. It is also home to a number of fair trade products, including both the coffee and the merchandise. Fair trade may be a foreign concept to some of us. The idea is that a company works with people in a developing country to ensure that they receive fair and full payment. The company also makes a long term commitment with the workers to ensure continuous work. Kileen says, “Fair trade is trying to make the scales more even.” Most fair trade companies also place importance on environmental sustainability, aka going green. Kileen purchases products from companies such as: Ten Thousand Villages, Dsenyo and Just Coffee Cooperative. All of the trinkets, toys, winter attire, bags, etc. in the Red Rooster are from Dsenyo and Ten Thousand Villages. Coffee from Just Coffee Cooperative is available by the pound and also to sip on, of course. Just these few companies are active partners with villages or areas in over 36 countries. This coffee house owner says, “it just makes sense to do business in a fair way.”

Along with running the coffeehouse, Kileen is also an avid traveler. In a sort of “which came first, the chicken or the egg” talk, Kileen told me how traveling actually came as a result of using fair trade. For Kileen, business and pleasure are intertwined. She has traveled around the USA, but also the world. Her destinations include East Timor, Estonia, Uganda, Tanzania and Ethiopia, just to name a few. After talking to Kileen about her travels it seems obvious why she would be such a proud supporter of fair trade. She has seen and met the faces of the people it supports and helps. Kileen set out and met with coffee farmers; she learned the different steps it takes, from growing the coffee bean all the way to the cup of coffee that sits next to us every morning. Kileen also talked about another beautiful aspect of this type of trade, the idea that the premiums are helping people build their communities. When the coffeehouse first introduced gift store items, Kileen and Dan started using a fair trade group called Greater Gift. On one of her adventures, Kileen (with Dan alongside) traveled to Guatemala from where part of the Greater Gift cooperative worked. They saw first hand the artists working on their pieces. They had the opportunity to learn from the artists and what fair trade was doing for them. The people discussed their work conditions, job training, health insurance and the increase in pay. As far as increase in pay, this meant that these artists can move out of poverty and also ensure that their children get an education.

Kileen tends to be a quiet, behind the scenes presence, but when she talks about her travels and fair trade she is animated and the stories of her travels flow out of her, “each country has really had a profound impact on my life.” So, whether you are a business owner or just a coffee lover, be a part of this vast web of fair trade partnership, “you are working in a partnership with farmers, artists and more.” // –Hannah Loefke