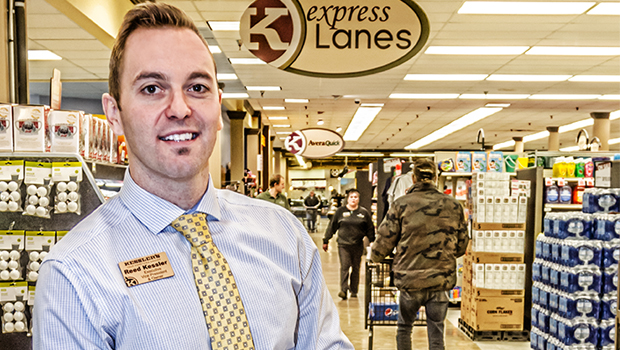 Bringing Back the Hometown Spirit

When you first meet Reed Kessler, you get the strong sense this is a man who knows what he wants. His shirts are pressed, his handshake is firm and his hair is neat. You begin to wonder why he’s here in Aberdeen and not on Wall Street.

One of Reed’s first jobs was at Kessler’s. By the time he graduated high school he was sure that he was done with Aberdeen. “When I graduated from high school, I couldn’t get out of Aberdeen quick enough.” After graduation, he moved to Minneapolis to study economics and entrepreneurship at Saint John’s University, where he met his wife, Kristina, at their sister school, Saint Ben’s. He remained in Minneapolis after graduation, taking a job with Associated Banc-Corp.

However, after a number of years in big business, Reed came to the conclusion that he would be much happier working at a smaller company. “I didn’t like working for a publically traded company. I didn’t like to just be working quarter to quarter, I wanted something with more meaning and purpose.”

So his search for work at a smaller company, combined with his and his wife’s desire to start a family, brought Reed back to the town where he grew up and the company he knew. “I didn’t think that Aberdeen is where I’d want to live or do business. But moving back here has been one of the best and most rewarding decisions I’ve ever made in my life.”

Since joining the company in 2008, Reed has done his best to not only carry on the legacy of his family’s store, but to revitalize and strengthen it. In the past seven years, Kessler’s has undergone extensive remodeling; their fresh food departments have been greatly expanded as well as their liquor section, which boasts a wide variety of wine and craft beer. He also credits much of the store’s success to the Pump Perks Program, implemented in 2010, which would later compliment the new Holiday convenience store that was completed in 2014. They have also seen considerable growth in their pharmacy, which underwent a full remodel after partnering with Avera and adding FastCare. They also recently acquired Jones Drug on 6th Ave.

In addition to the success of the business, Reed also puts a lot of focus in the store’s continued reinvestment in the community. Many programs that Kessler’s hosts, such as the annual Grape Times event, Beer, Boots and Bourbon, the Dollars for Scholars program and Kessler’s Big Top Tent (held at the Brown County Fair) were started before his time, but he still takes great pride in being a steward for them the past few years.

But it’s not just large-scale events that they’re involved in, Reed and his team also give support to many small-time fundraisers as well. “At the end of the day, one of the most rewarding things we get to do is give back to our community. We’ve been so fortunate and blessed to be supported by such a great town like Aberdeen.”

Whether it’s gas, groceries or good wine, Reed and the whole Kessler’s team is ready to help however they can. // –Sean McCracken