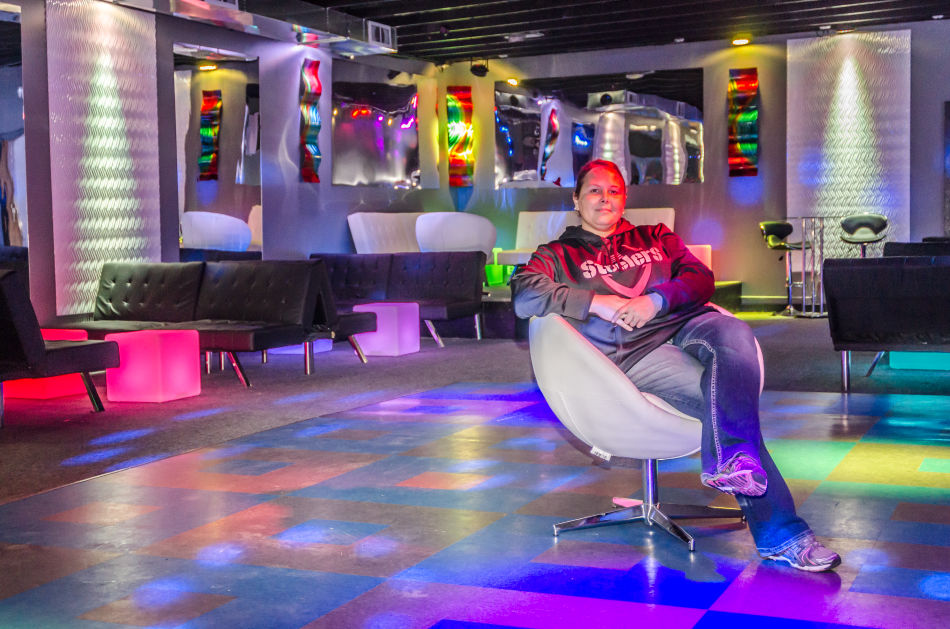 A trip into the Pulse Nightclub feels like entering another dimension – a place foreign to the rolling plains and small town vibe of Aberdeen, into what feels like the electrically charged nightlife of a big city.

Upon walking into the club, you will immediately be greeted by the sleek, modern interior. Past the bar, a stretch of hallway illuminated by flashing disco lights leads into a dance floor alive and pulsating with the sound of heavy bass. Throngs of people sway in time with the music as others mingle with their friends on the lounge couches in the VIP area, enjoying an ice cold drink.

Kelli Severson and her husband Jeff decided to transform the building on 1023 South Main into a nightclub to make up for the lack of activities available for 18-20 year-olds in Aberdeen. Jeff operated the building, formerly known as the Last Chance bar, until he went overseas and it was converted into apartments.

Although Aberdeen offers a variety of activities for its youth, there is something to be said about the lack of things to do during the evenings for young adults under 21. Kelli saw this need and decided to fill it. “It gives kids something to do other than go to the movies or go bowling.”

When designing the nightclub, Kelli was passionate about bringing something new and fresh to Aberdeen that the community had never seen before. There are many bars in town sporting similar facets such as pool tables, dart boards and beers signs. “That’s fine and that’s great, but I wanted to do something a little different for this. I want it clean, with lots of LED lights and a big city type look,” Kelli said.

A knack for interior design helped Kelli make her dream a reality. Together with her husband, she has helped remodel and flip many houses in the past. “I walk into a room and I can see what I want it to look like,” she said. “Everybody else thinks I’m crazy, but I see what it can be.”

The Seversons started demolition of the whole interior in January 2015. Initially, they planned for it to open around April or May, but were set back a bit by a change in the National Fire Code requiring a sprinkler system for places of entertainment housing over 100 people.

Additionally, the nightclub took time to open because the construction was strictly a family project. Jeff, Kelli and their kids completed most work without the help of contractors. “As a family, we built it.”

Mikey Barreneche, or “DJ Mikey,” is responsible for the “sick beats” pulsating throughout the nightclub. He plays a mixture of dance music, EDM and music from the top 40. For the most part, he selects music based on what the crowd is grooving to, or what their style of listening is.

The nightclub has a malt beverage license, and serves drinks from domestic and import beers to twisted teas and wine coolers. They also serve non-alcoholic drinks such as soda, energy drinks and a variety of teas. The club also serves pizza for those who dance up an appetite.

Although the club encourages camaraderie between young adults of all ages, a strict zero tolerance policy is enforced to prevent underage drinking. The club utilizes a 16-camera security system, undercover employees and a scanner that checks the authenticity of IDs. When a minor is caught drinking, they are turned over to the Aberdeen Police Department. “The message is getting around, and I think people don’t want this to get shut down,” Kelli explained. “I’m not naive, you’re always going to have your usual suspects. But I think after a month or two of people getting kicked out, they’ll start to realize that isn’t a place to get drunk underage.”

Kelli stresses that the Pulse’s ultimate goal is fun. “I think it’s a great concept,” she said. “I love that kids under 21 can now hang out with their friends who are over 21, and vice versa. More than anything, it gives them a fun, structured place to hang out, dance and be themselves.” // –Becca Simon