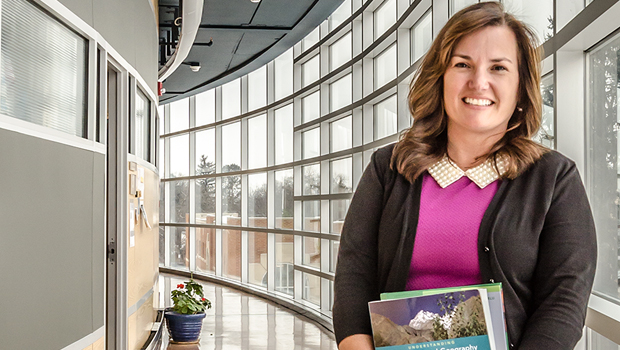 Taking a Good Look at the World

Most of us remember memorizing the capitols, locating rivers, and coloring in maps as the extent of what we learned about Geography in school. But take it from Dr. Erin Fouberg, who wrote the book on Geography (two in fact), there is a whole lot more to learn.

Dr. Fouberg began thinking geographically at a very young age, due in a large part to her father, who was also a Geography professor. However, she initially didn’t want to follow in her father’s footsteps; the first few classes she took at Georgetown were, in her opinion, entirely too theory based and didn’t consider the impact of the people enough. Fortunately her opinions on the subject were assuaged during her sophomore year after taking Human Geography and Political Geography.

Unsurprisingly, Dr. Fouberg has a lot of traveling under her belt, although not yet as much as she would have liked. “There’s a lot of the world I still need to see.” She has been through Europe, India, China and she recently returned from Costa Rica. She has traveled for both business and pleasure, but hardly sees much of a difference.

“Whenever I travel I’m learning something. I tend to go to museums and churches and cemeteries. I also never eat at chains when I’m out of town, I like to experience as much of what I can of what life is really like in a place, even if I’m only there for a few days.”

This experience (as well as a ton of outside research) has helped her teach not only at NSU, but also to millions of students all over the country. She has helped write a total of five editions of two different college level geography textbooks, Understanding World Regional Geography 1st ed. and Human Geography: People, Place, and Culture. 8th-11th ed. Of course, when writing a textbook, the information you include has to be ironclad, and the research and fact-checking necessary can be staggering.

“Just writing a paragraph can take a day of reading, just to make sure you get it right.” And with all the places there are in the world, it may seem like an insurmountable task. But as Dr. Fouberg reminds us, teaching Geography isn’t about explaining the facts about every single country, but teaching students how to think geographically. // – Sean McCracken

“Aberdeen is far enough away from places like Sioux Falls and Fargo, where if we want something, we have to build it ourselves. This can be seen through places like the YMCA and the Aquatic Center as well as the impressive number of small businesses in the area. Whether it’s places like Ken’s, Kessler’s, and Malchow’s who have been in the community for generations, or places like Canterbury, The Brass Kettle and Slackers who are still building, Aberdeen is unique in its ability to let people start their own business.”