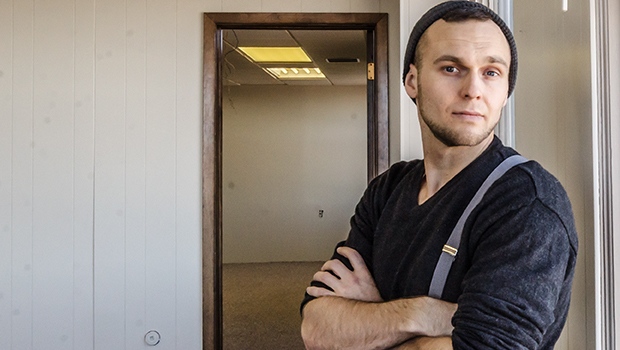 Build your Life. And then Keep Building.

C.S. Lewis once said, “You are never too old to set another goal or to dream a new dream.” Whether Travis Kiefer has heard this quote before or not, he has definitely lived it. After graduating from Groton High School in 2006, he soon achieved his goal of attending Stanford University. Not long after, he set his sights on his new dream of getting involved with the Silicon Valley start-up scene. After taking some time off school, he took his first steps toward his new goal by running a marathon on every continent to raise money for a non-profit, and then soon after built his own start-up company. It was not long after that Travis felt the need to return home. He began using his entrepreneurial experience to become a consultant for other start-up companies. After coming back to Aberdeen, becoming a consultant, and investing in a number of real estate properties (including the iconic Citizens Building, which he purchased last July) he has arrived at the present, where he is working toward a new goal, and dreaming another dream.

The next big idea…

Travis Kiefer’s next big idea revolves around three simple concepts. First, the primary computing device for nearly everyone these days is the smart phone. Whether you’re running your business with it or simply running your life, everyone is beginning to see the point in having one. Second, is the commoditization of hardware, basically being able to assemble hardware products on a relatively low budget. Third, and foremost, is elder care.

He recalls, “My mom had worked in an assisted living, nursing home environment since I was five, so I was very familiar with the process of aging and how it lacks a level of dignity that a lot of people want.” Travis knew there was some way to bring technology and elder care together, but didn’t quite know what it would look like. In October, he had a meeting with Nathan Gellhaus owner of Angelhaus here in Aberdeen, to get the ball rolling in this newest idea. Both men knew that technology could play a very pivotal role in making the aging experience more dignified.

The new company Travis has started strives to provide dignified care and help people live at home with ease, hence its name, Ease. It reflects the company’s ultimate goal, which is to help our elders live the life they want to live, with ease. But what does all this actually mean? What does Ease even do? While many products are still in the development stages, the main focus right now is providing awareness of one’s living situation through an array of sensors throughout their home. They might detect things like if the stove gets left on, if the floor has a slippery spot, or if someone’s taking a bit longer to get out of bed than usual, and then inform the appropriate people. This will hopefully give seniors a level of independence they may not have had before. No one wants to feel like a burden, and with technology’s assistance, no one will have to.

Travis currently plans to use the ample space available at the Citizens Building to develop and produce the products that Ease will provide.  However, he didn’t actually purchase it with that in mind.  When asked why he bought the property, he responds with great enthusiasm.

“I love buildings! I love architecture! I love urban design! I love the feel of a city when you’re walking through it!” Travis proudly considers himself to be a flaneur, someone who strolls about with no set destination.  He first fell in love with the idea while taking an Urban Studies class at Stanford and eventually became an Urban Studies major. So when he moved back home and found out the iconic, downtown building was up for sale, it was an opportunity that he simply couldn’t pass up.

What has Aberdeen provided you?

One might wonder why someone who spent so much time and gained so much success out in Silicon Valley wouldn’t stay out there rather than come back to Aberdeen. For Travis, what brought him back were the values and the people that make up this part of the country.

“We’re hardworking, we’re earnest… it’s the level of trust in the community that really appeals to me.” Having that quality of life and the focus on human values was something he grew up with and truly appreciated. This has been particularly noticeable to his entrepreneurial spirit.

“When I’m reaching out and trying to start something new in the downtown, I’m getting a lot of people who are super receptive and excited… there’s a general support and appreciation of what I’m doing.”

It’s plain to see that despite all his experiences and adventures all around the world, Aberdeen is where he wants to call home and where he wants his future to be. But that doesn’t mean his adventures are over. He has seen all that his community has provided for him and he plans on providing something back.

“What I wanted to being back with me from Silicon Valley is this entrepreneurial spirit, this sense of ‘we can create an economy here that can be part of the industries of the next 25-50 years,’ and I want to be a part of that process… What we’re tying to do is show people that they don’t need to rely on someone coming in and giving them a job, they can create their own job.”

To that end, Travis is working with StartHub, with the intention of having “pop-up stores” on the second floor of the Citizens Building. The basic idea being that people who have an idea for a business, but don’t feel ready to commit to a year long lease, can use the space for a month or so, rent free, to try out their business idea. Travis believes that the minimal risk and the learning environment will lead to a growth of small business and entrepreneurship in the community.

Many people think of the small town setting as a stepping-stone in their life’s journey. And sometimes that’s true. But if Travis Kiefer has anything to say about it, places like Aberdeen will become a destination for those journeys. After all, there is still a lot more to look forward to. // – Sean McCraken