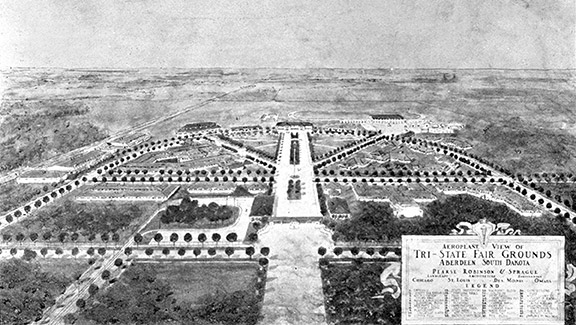 A look at how the Brown County Fair has changed throughout its 95 years of history.

Since its beginning, Aberdeen’s Brown County Fair has continued to be the center of social, economic, and agricultural gathering in South Dakota. In 1921, a local newspaper defined the fair as “a place where all the people in a community may go and meet every other man, woman, and child and compare their products, the fruits of their labors and their merchandise with those of the others.” 95 years later, the Brown County Fair continues the legacy today that it began all that time ago.

Though it has been in existence since the 1880’s, what we know today as the Brown County Fair began in fall of the 1920’s. Representing South Dakota, North Dakota, and Minnesota, the fairgrounds were originally owned and operated by the Tri-State Association, who wanted to create an event for the showcase and selling of livestock, vegetables, grains, and machinery, while promoting community through congregation. On September 5, 1921, at the Brown County Fair’s current location just northwest of Aberdeen, the Tri-State Fair opened its doors for the very first time.

With local railroads offering special rates for travelers heading to the fair, visitors were treated to horse shows, livestock competitions, and agriculture classes. For women, Tri-State Fair events would have consisted of shoe races, style shows, and a “What’s New in the Dairy Department”, sponsored by Kessler’s. Entertainment included marching bands, circus acts, and miscellaneous “free acts” between scheduled sets.

Despite the large crowd turn-out for the first Tri-State Fair — “it packed the grandstand to capacity and overflowed around the track,” read a 1921 newspaper clipping—the Association had even greater ambitions in mind when they chose the location and built the structures for the event. Walking in, one visitor commented that, “distances are being planned with an eye to big things. Plans are made to handle big crowds in a big way.” In fact, they were not off by much in their projections — the Brown County Fair draws over 200,000 visitors from across the region each year.

Unfortunately, the Great Depression had a comparably disastrous effect on the Tri-State Fair as it did for the rest of the country. In 1933, the Association was forced to foreclose on the fairgrounds due to financial problems. The Brown County Commission swooped in and took control of the land at this time, and in 1935, the Brown County Fair was born.

Financial problems were not over for the fair, however; in 1986 the Brown County Commission reported a deficit of $35,000, which was apparently ten times more than was previously conveyed to the public.

Nevertheless, the Fair Board had some ideas to help alleviate the large debt, in the form of ticketing fees. It was then that the “Booster Button” concept was introduced. The idea was that whoever bought and wore the button to the fair would be granted access to all of the quality grandstand entertainment for the week.

The “Booster Button” allowed more people to experience the fair by making the entertainment more affordable, and consequently increased revenue for the fair. This model is still being used at the Brown County Fair today, though the actual buttons are a thing of the past. All of the profits that came from the “Booster Buttons,” or come from today’s tickets, go to improving the fair in some way: bigger, better names in music entertainment; more exhibits, shows, and displays; newer and updated buildings and grounds.

But despite being well-known for its excellent music entertainment, the modern day Brown County Fair still incorporates shows, classes, and competitions of all breeds of livestock, poultry, and field and garden crops. There are also the rodeos, tractor pulls, food vendors, children’s events and chili cook-offs that bring in high attendances from visitors each year. And even after all this time, the Brown County Fair is still a free event, making it one of the only fairs in the nation that still is out of the 2,500 that occur each year.

The concepts that founded the Tri-State Fair in 1921 are still central today; the Brown County Fair is a place for people to gather, share, and compare their lives, products, and interests with those of others in the area.

Today, a 25 member, all-volunteer Fair Board is dedicated to making each Brown County Fair the best one yet. This year’s fair will be held from August 15th—August 20th, with Dustin Lynch, Montgomery Gentry, and Jake Owen as the headlining performers. More information about fair events can be found at www.brown.sd.us/brown-county-fair/home. // – By Erin Ballard