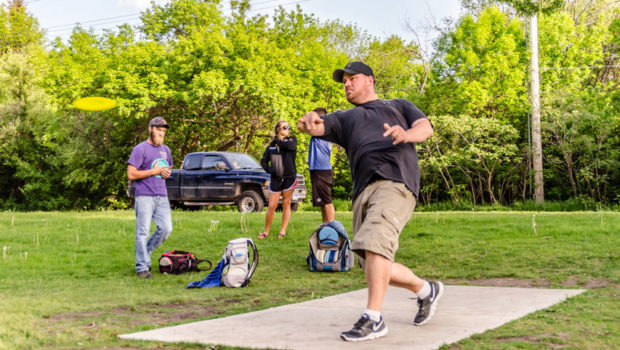 Disc Golf Takes Off in Aberdeen

Disc Golf is a sport that has grown exponentially over the years, with Aberdeen being no stranger to the growth. The Richmond Lake Disc Golf Course, which has been around for almost 20 years, offers a beautiful course that provides a challenge to players while also housing a fun and relaxing activity that people of all ages have come to enjoy. Disc golf is very much like regular golf, however instead of a set of clubs and ball, you have a frisbee. Instead of a hole in a small hill on plastic grass, disc golf uses a basket with chains strategically placed to provide the best challenge to aim the frisbee towards. It’s slow paced enough for anyone to play, while being fast paced enough to make you want to keep going again and again and spike your interest.

The sport of disc golf is fairly simple. You start out at the tee pad and throw your frisbee towards the goal, continuing until you make it in the basket. The stroke count is the same as in ball golf. The player with the lowest score begins the next round. The player with the lowest score at the end wins the game. Some players and leagues have even come up with new rules and games to shake things up a bit.

For Seth Gennetten, disc golf is a sport he has been a part of for quite awhile. How long? “I always take that as two questions. I’ve been playing recreationally since 2006, so about 10 years now. But competitively and being active in the community, about two years.”

Since he loves the sport so much, Seth revived the Aberdeen Disc Golf league, which was disestablished years ago due to most of the members moving out of the area. Gathering friends and other players around the area who shared the common interest, Seth formed the current league that meets every Monday and Wednesday at 7 pm at the Melgaard Park Course. On Sundays, the league regularly has mock tournaments out at the Richmond Lake course. Both options are open for everyone to partake in, and are beneficial ways to grow and expand your disc golf skills.

In addition to starting up the new league, Seth and three other members of the league designed the new 9 hole Melgaard Park course as another option to use. The course was approved by the city quickly, however, installing the tee pads took a little longer. The course is now completely finished, and is used everyday by players of all ages. “It’s a sport that’s for everyone, and it’s inexpensive. You can go to Wal-Mart and get three discs for like 15, 20 bucks. It doesn’t matter your skill level, everyone is welcome,” Seth encouraged.

Currently, Seth is working on getting 8 more holes installed out at Richmond to offer a different tournament style for both the local league and the national tournament. The holes will likely be installed by October, as well as different tee placements for some of the holes and overall general changes and maintenance to the course.

For many, disc golf is used to relax after a long day, to provide relief from everyday stress, or to get your mind off of personal issues. For Seth, disc golfing is the perfect way to calm down. “I know that if I’m having a terrible day, I can go out and throw and not even have to keep score or anything, just throw, and feel immediately better. It’s like walking meditation. At the same time, I like the competitive side because it keeps me wanting to play and get better. As it gets bigger, it also gets a lot more fun and gives me more opportunities to go to tournaments around the country.”

Sales Tax Is Up →