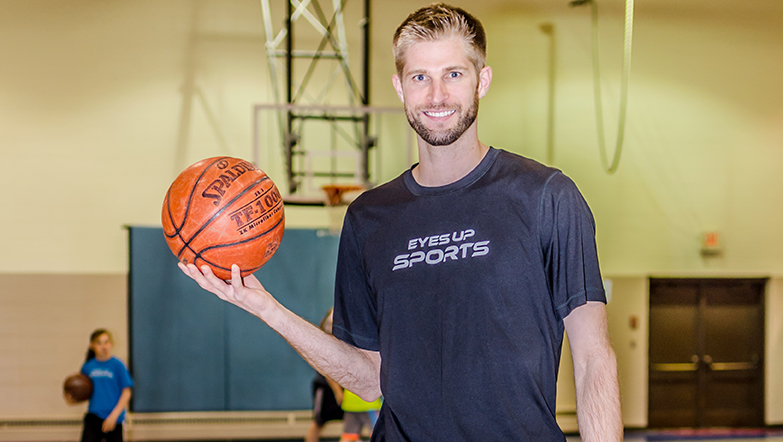 Keep Your Eyes Up

Find your gift. Develop your gift. And pass it on.” These words, spoken by the late Northern State University basketball coach Don Meyer, have served as a guiding light and life motto for Kevin Ratzsch, owner of Eyes Up Sports. A 2009 graduate, Kevin played basketball for NSU under Don Meyer’s guidance before going on to play for teams around the world. Now, four years later, Kevin remains on the court, passing his gift on to the youth of Aberdeen.

Kevin believes his time at NSU was very transformational. “I definitely came here a very immature mama’s boy, and left a man, or almost a man.” His college experience was much more than simply playing basketball and going to class. Coach Meyer held his players to very high expectations both on and off the court. Before anything else, Meyer stressed the importance of serving others and taking responsibility for your own mistakes. “He (Meyer) drilled us every day,” he explains. “He kicked our butts.”

But NSU was just the beginning. For three and a half years after college, Kevin flew overseas and played for four different teams in Ireland, Australia, and Spain. By this point, his body was very worn out, so he moved back to his home in Illinois to take some much needed R&R. After coaching for a year at Mayville State, North Dakota, Kevin received a call from the Fellowship of Christian Athletes, who just so happened to be searching for a sports chaplain in northeastern South Dakota. The workouts he ran in Aberdeen continued to grow and grow until Kevin realized this is what he wanted to make a career out of doing.

Although he was running workouts for both the FCA and another company, they weren’t clicking completely with his personal vision. “Many sporting companies are focused exclusively on getting kids scholarships and pro contracts,” he explained, “There’s nothing wrong with that, but that’s not what I’m going to preach to a kid.”

Instead, Kevin wants to show kids that the way they commit to something can carry over into other parts of their life. Taking a page from the words of Don Meyer, he encourages kids to find and develop their own unique gifts. “I get some kids that are outcasts in some regards, and I say embrace that. If you have a different personality and different style than most people, that’s a good thing. Don’t try to hide who you are.”

Thus, Eyes Up Sports was born. During his workouts, he constantly tells the kids to keep their “eyes up.” On the religious side, it goes even deeper than just physically keeping your eyes up, hence the name.

Kevin looks forward to growing Eyes Up Sports even more in the future. This summer, they will launch a volleyball program and host a daily camp that will last the whole summer. In addition, he plans to partner with Aberdeen Christian to build a gym that Eyes Up will also utilize.

Above all, Kevin wants to change the way people think about themselves and sports as a whole. “Sports seems to be the number one thing in the world, and it’s used negatively lots of times for business and selfish desires. I can’t change that, but I want to help change mindsets. I can’t change a billion people, but if I can change a few hundred mindsets, it’ll grow into a thousand mindsets and then ten thousand, and then who knows?” // – By Becca Simon