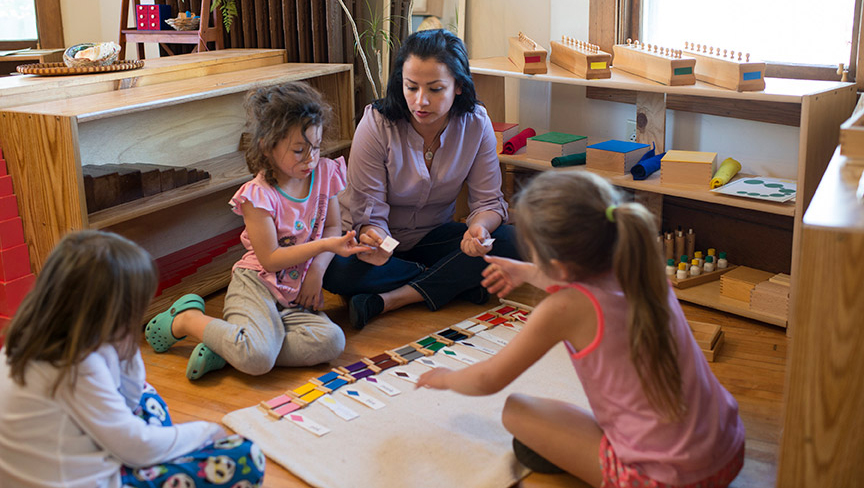 Susan Dalager affectionately refers to the Montessori School of Aberdeen that she directs as a ‘casa dei bambini’ or ‘children’s home’. This is because everything in the school, from the math supplies to the kitchen utensils, is sized for and placed easily within reach of active preschoolers and kindergarteners. Not to mention their learning facility is literally set up inside a beautiful, historic home in Aberdeen.

The term Montessori refers to a philosophy of education founded in the early 1900s in Rome by Dr. Maria Montessori. The method encourages a love of learning by allowing children to complete everyday tasks and acquire educational skills in a hands-on environment.

If you were to step inside the Montessori School of Aberdeen during the day, you would find a busy group of 3-6 year olds actively exploring their world. In one area, students can grab a spot and start working with various academic tools like math counting blocks, letters, map puzzles, paint easels, or science experiments. In the next room, children can practice basic life skills by gathering dishes and food prepping supplies and helping out in the kitchen. Heading outside into the yard, you will find a vegetable plot and bird feeders all cared for by proud student gardeners. Everything in the home is set up in a way so that young kids can access the materials that interest them and complete projects on their own. Students also take part in various field trips around the area throughout the year. One of their favorite spots to visit is their own outdoor campus, complete with nature trails and chickens to tend, located a mile and a half north of Aberdeen.

The school has grown in recent years, but has been a part of the community for decades. Aberdeen native Susan Dalager is the current Directress and also the founder of the first Montessori School of Aberdeen, which she started in the early 1980s. While studying Elementary and Early Childhood Education at Northern State University, Susan became impressed by the Montessori Method of teaching and after earning her B.S. Degree, she went on to complete two years of Montessori Teacher Training. A short time later, she opened Aberdeen’s first Montessori school at the same time her oldest child was at the age to be able to attend the program. Her family eventually moved from the area, but all six of her children attended Montessori schools in other locations while other Directors ran the school in Aberdeen. Then in 2009, Susan moved back to Aberdeen and coincidentally also had a preschool aged grandchild. She decided to relocate and renovate an old home and turn it into a new Montessori school to serve her granddaughter and other children. The idea snowballed, and the school has been growing in enrollment numbers ever since. Full-time Spanish instructor Elizabeth Kiesz and teachers Jillian Schaunaman and Mariah LeBeau have also stepped in to work with students throughout the day.

“One thing that makes our school so special is the involvement of the parents,” Susan said. “We serve families who have moved to Aberdeen from all different parts of the world including India, Pakistan and Mexico. The parents have been wonderful in bringing in food, items and experiences in order to share their cultures with the children. We also have students who attended the Montessori School when it first started in town back in the 1980s now as adults sending their own children to the school.”

To learn more about the Montessori School of Aberdeen you can call Susan Dalager at 605-725-2269 or visit www.montessoriaberdeen.com. // – By Jenny Roth