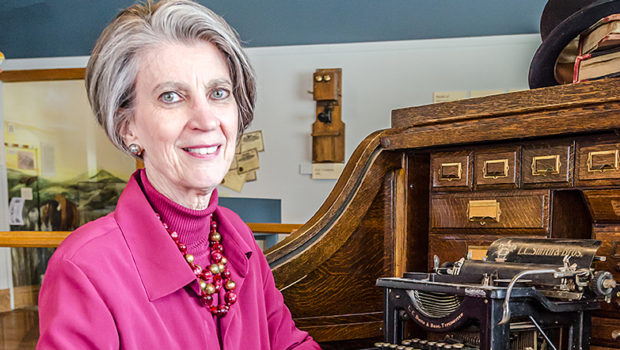 Safekeeping Memories from the Past, for the Future

Everything has a history. Even the smallest of objects can tell a story about the person who owned it, who owned it before them, or who created it. By asking questions about the things and people around us, we participate in an ongoing dialogue that connects us to our past, present, and even future. For Sue Gates, the director of Dacotah Prairie Museum, this curiosity became a lifelong career.

Sue grew up being surrounded by history. Both her mother and her aunt were avid antique collectors. When she was in 9th grade, she did a civics project on a dear old friend whose life was rife with stories about moving to America. However, she could never predict that these influences would be a forerunner for what she was going to do for the rest of her life.

An Aberdeen native, Sue has served the museum for 28 years. Looking back, she never would have expected she’d end up back in Aberdeen or that so much of her life would be dedicated to history. She obtained a degree in music performance from St. Olaf in Northfield, Minnesota, and in an unexpected turn of events, she returned to Aberdeen and opened up her own music studio where she taught students how to play the piano and flute. While looking for a part-time job to fill her day when she wasn’t teaching, she stumbled upon a position in the museum’s collection department. In 1995, the director left and she was encouraged to apply for the job, and the rest was (quite literally) history.

According to Sue, each day at the museum is exciting and different. She starts each day with a to-do list, but between all the people coming in asking for research requests, bringing in artifacts, and asking for tours, not much gets crossed off that list. Towards the end of the school year, the museum gets even busier as students fill the building for various activities and demonstrations.

Sue says she loves the engagement Aberdeen has with the museum. “I think that the community has become aware that this is a place where you can share your history, either your personal family history or your business history, with the public.” When businesses close or people are cleaning out their houses, they often bring in their treasured items that are representative of either their family or their business. Since the museum takes care to carefully preserve each item, people can be sure that their memories will be kept safe. “It’s a real honor to be responsible for people’s history,” Sue explained. “We are stewards of your past.”

Moving forward, Sue wants to see Dacotah Prairie continue to build on its good reputation and incorporate more recent history in order for the museum to move more seamlessly into the future. In order to do this, the museum is going digital by beginning to put their collections online so they will be accessible to everyone.

Whether you’re interested in Native American culture, fashion history, or art, Sue guarantees that the museum has a little something for everyone. This fall, they will be opening a new exhibit that features a rotational theme of sports in Brown County.

“I always hope that people take away an appreciation for their hometown, and that they learn something that they didn’t know before.” // – By Becca Simon