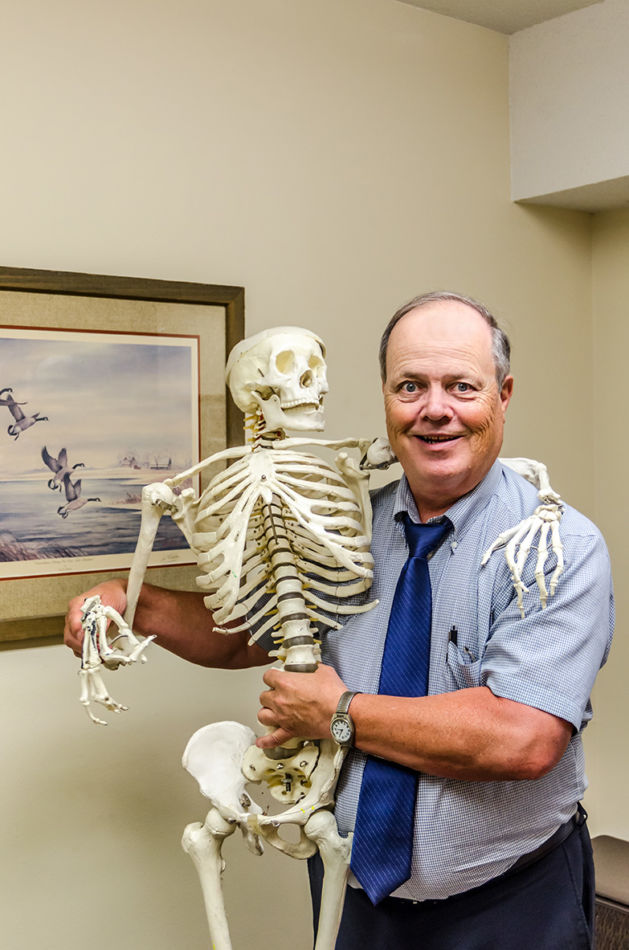 Brian Kamerud’s chiropractic office is littered with ghosts of Halloweens’ past. Costume catalogues and prop books fill the shelf next to his desk. A box of different colored hair extensions and a fake blood bag appear as he digs through, alongside fake skulls and a few light-up pumpkins.

Dr. Kamerud is a charter member and ex-President of the Optimist Club. It was his membership with the club that originally got him involved with the Haunted Forest almost 30 years ago.

“In the beginning, we would just put on a mask and get behind a tree,” he says, reminiscing on how much has changed since back then. And a lot has. While the Haunted Forest still puts up at least 13 scenes each year, the sets that scared visitors ten years ago may not even be part of the acts today. The gory scenes of the late 80s and early 90s are a thing of the past – today, zombies, rats, gargoyles, and killer clowns reign supreme for the scariest sets.

And when he says he’s been involved in the organization of the event every year, he really means it. Dr. Kamerud has worked as an actor in the Haunted Forest every Halloween since he joined the Optimist Club. “I’ve hung from a noose, been a chainsaw killer, dressed up as a killer clown, hid in a pit as a mole man… I have always worked at a scene,” he says.

In order to cope with the fluctuating scare trends over the years, Dr. Kamerud and his fellow volunteers have had to be a little creative when coming up with set ideas. “One year we had people jumping out from trees, the next we had flying monkeys and everything was coming from up above,” he recalls. “The following year I came up with ‘Mole Man’, who popped out of dug-in pits in the ground.”

Crowds have grown over the years, too. “We get a lot of repeat business,” says Dr. Kamerud. To better surprise the teenagers who come back each night, volunteers have gotten smart. “We can’t give the same performance two nights in a row.” Even if the acts themselves are the same from night to night, their locations change. The goal is to keep guests on their toes.

Looking back on all of the memorable years he’s spent working on the event, Dr. Kamerud recalls one night very vividly. “It was the year we introduced the Killer Clowns. We literally scared the pants off a Northern athlete. He ran away with his shorts around his ankles,” Kamerud remembers, laughing.

That patron wasn’t the only one so terrified he left the scene of the crime. “Each year we have 20 to 25 people who won’t continue after the first set,” says Kamerud. Those numbers might have something to do with another of Dr. Kamerud’s favorite memories of Haunted Forest. A highlight for him has been the competition between two brothers who work on a different set every year. “Each year they compete to see who can scare the most people. It’s pretty entertaining.”

Dr. Kamerud and the Optimist Club do their best to bring in new material as often as possible to the Haunted Forest. All of the money they spend at conventions is raised from ticket sales. One year, Dr. Kamerud mentioned Aberdeen’s Haunted Forest turnout to some people at the Chicago conference: “You wouldn’t believe how surprised he was that we get 4,000 to 5,000 people in a weekend – they have theirs open year round and don’t get those kinds of numbers!”

Haunted Forest has become a huge attraction for the Aberdeen area. To keep up with such a large and growing audience, the Optimist Club is always looking for new members who will help set-up and work sets at Haunted Forest each year. As of right now, it takes about two weeks and 200 volunteers to get the event ready for the public. Even if you aren’t a fan of getting scared, Dr. Kamerud promises it’s a good time. “It’s just fun. The kids love it, the adults love it. You’ll love it so much you won’t want to go back.” For more information, visit the Optimist Club Facebook page. // – Erin Ballard