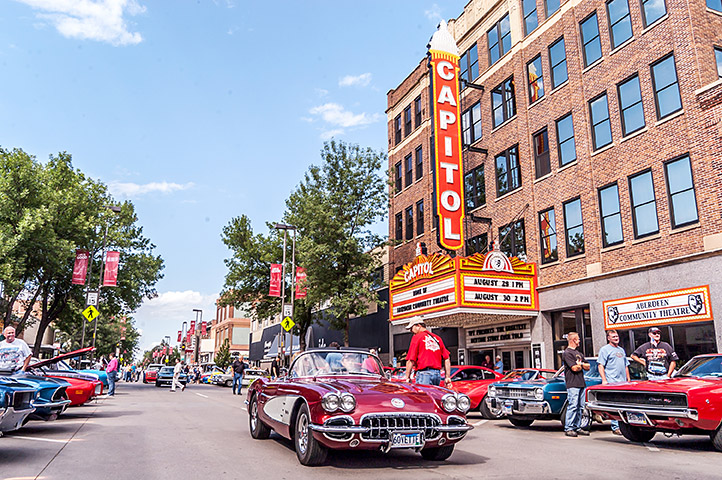 No one forgets their first car

Every year I go to Sizzlin’ Summer Nights, and I’m disappointed. Not by the cars there, but the ones that aren’t. My cars. I don’t expect the actual cars I drove to be there, but the models don’t even make the grade.

There’s a good reason: my cars are dull. In my version of the American love affair with cars, I’m a function-over-form guy. Fuel efficiency and cargo space don’t rank highly for collectors. Not that I don’t fantasize sometimes about a Corvette or Ferrari—those curves and the power—but I always return to one with sensible tires.

I count around 20 cars in my life. The one with the best chance of showing up on Main Street is probably the first one I ever drove: a 1955 Ford Customline (its overinflated look always makes me think of bald Fred Mertz in I Love Lucy—did I say dull?). I use “drove” loosely. I was two years old, living in Redfield. My parents had just returned from somewhere so I gallantly decided to drive the babysitter home. Unbeknownst to me, someone else did. Alone, I was standing in the driver’s seat one moment, and the next, having probably kicked the parking brake, I was a block away from home, up a curb, about 20 feet short of Highway 281, and hiding from the adults coming out of the house in front of me. Dad made me apologize to Mom for scaring her by disappearing. She was six months pregnant, which probably explains something about my little sister.

Often hand-me-downs, my cars were basically interchangeable—simply the way I got from place to place. Functional. As a teenager, I inherited my brother’s 1972 Ford Maverick, the other car I think could show up on Main Street. It was the first car in which I made an uncountable and unrequited number of trips past a particular girl’s house. Then it had too many miles, so we traded.

But eventually, cars took me through life. A Chevy Vega got me to college—800 miles, always filled to the brim with people and stuff, usually driving all through the night. So did my father’s Oldsmobile 98, in which my brothers said I could take the whole junior class out for beer. I used a Chevy Citation for a senior year trip out East, where we almost got in a fight with singer Rick James. After college, that car moved me to the East Coast and took me on first dates with my wife. The red Honda Civic, the first new car I ever bought, took my wife and me to the hospital to have our children and also took our young family to one of their funerals. A Ford Taurus brought us back to South Dakota. My son drowned a Mercury Sable on Dakota Street in May 2007 (and, having thoroughly baptized it, resurrected it the next day). Another son, driving his little sister, nearly slid across 6th Avenue in a Dodge Dakota with suspect brakes.

And the vans. Not the custom conversion vans that were the dream of my concupiscent teens, but the family mini-vans—a Pontiac Trans Sport and Toyota Sienna—that I have driven for nearly half of my 40-some driving career. Like many guys, I never thought I’d drive one, but I became impressed with—or grateful for—their functionality and the simple ability to fit my whole family comfortably (well, relatively; we never stopped filling cars to the brim). Even if some slept, watched movies, played video games, or fought, we were together in one space, a valuable feature for a family growing up, getting cars, going to college, moving on. Despite their curves, Corvettes aren’t made for that.

In the end, chagrined that my cars didn’t make the cut, I am a little envious of people who fill Main Street with memorable cars, but I’m satisfied with cars filled with good memories. // – Pat Gallagher