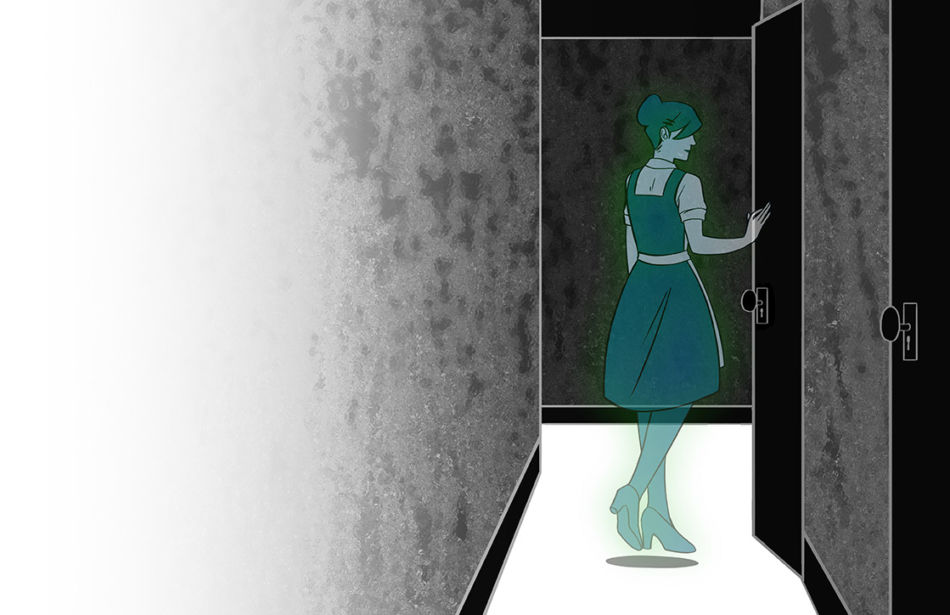 Ghosts, Goblins, and Ghouls, Oh My!

Occasionally, employees of the Ward Hotel are serenaded by the sound of piano music in the ballroom, despite the fact that the piano is tucked into a corner and completely covered up. In the past, a maid could be spotted going in and out of the hotel rooms that are now apartments, even though there are no maids currently employed.

The frequency of unexplained occurrences in the Ward is nothing new. Various ghosts are rumored to haunt the building, earning it a spot in the top ten haunted places in South Dakota. The story goes that a young girl jumped to her death from the fifth floor of the building, but her spirit lives on, creating mischief and wreaking havoc. To this day, employees have experienced drawers opening on their desks and cabinets opening and closing on their own. Once, the large, heavy podium that stands in the center of the room flipped over as if being pushed by some invisible force. Blankets have been ripped off beds in what used to be room 230, and high heels have been heard walking on a wooden floor, despite the fact that the floors are carpeted.

Tales of wandering lost souls have been passed down through generations since ancient times. From century to century, the appearance of a ghost continues to change – since the 19th century, people have generally thought of ghosts as translucent specters, but in early European times, ghosts appeared real until they walked through a wall. Regardless of the form they take, however, these stories have continued to frighten and captivate every generation.

Aberdeen in particular is a hotbed for supernatural sightings. The town’s rich history, along with its well-preserved slew of still intact historical buildings means the ghost stories are absolutely ripe for the picking. Whether you believe them or not is entirely up to you, but even for the most practiced skeptic, it’s very hard to deny that things that seem to defy all physical laws are nothing more than spooky garbage.

Which brings me to the question: Are ghosts the spirits of the undead as we’ve come to accept them, or is the word “ghost” simply a name for something we don’t understand?

Local paranormal investigator Randy Ivy has been enraptured with the unknown since he was too young to understand what was going on, and has dedicated much of his time to answering these types of questions. He claims that every place he has lived in since moving to Aberdeen has had some sort of paranormal activity. Especially common are what Randy calls “residual” hauntings, or ghosts that reenact the same instance over and over again at the same time, almost like a recording. “Aberdeen is good for this because we have underground water, quartz, and marble in the ground that produces energy,” he explained. “They vibrate at different speeds and are great for recording things. High-energy moments are picked up and converted into a different form of energy that can be played back. You hear stories about the lady that walked down the hallway and turned right into a wall. It’s because it’s that energy on a rewind. It all sounds crazy, but it’s a new science, so no one has the answers to everything.”

These recordings aren’t the only factors that make a place haunted – or at least cause us to feel that it is. The basement of the Ward has reportedly given employees the heebie-jeebies for decades, causing many to avoid it altogether. Although it seems as though something spooky is afoot, according to Randy, it’s more likely that different types of energy are at play. There is an electrical room in the basement that is surrounded by wiring, both in the ground and up and over it. This is what Randy calls a “fear cage” –electromagnetic fields that affect your brain and kick your survival instincts into gear.

Despite the many advances in technology used to investigate things that go “bump” in the night, there are still many hauntings that science can’t explain. Several houses and apartment buildings in Aberdeen have had multiple reports of “intelligent” hauntings, or cases in which a ghost is able to interact with objects and people in the living world. In one empty home on 8th Avenue, Randy picked up over 40 EVPs (recordings of spirits’ voices) of dogs barking, people joking, and even of voices referring to the people within his group. When he knocked on a wall, someone or something would knock back, even though the group was alone and there was no electricity in the building at the time.

In another home, a man hung wind chimes made of silverware inherited from his grandmother in the corner of the kitchen, away from any windows. “He could talk to it,” Randy said. “He’d ask it to turn to the right, and the wind chime would turn to the right. He’d tell it to stop and it would stop. It moved wherever he told it to go.”

Multiple buildings in downtown Aberdeen and beyond are reported to have similar hauntings – elevators dinging in buildings with no electricity, doors slamming randomly, eerie silhouettes lurking in doorways, and more. Are these unexplained phenomena ghosts? Or are they simply something modern science doesn’t have the capability to comprehend yet? Perhaps a heightened mental state when we feel frightened causes us to see things we wouldn’t normally. But regardless of what you believe, there is something exhilarating about suspending your belief for a time and indulging in the exploration of the unknown.