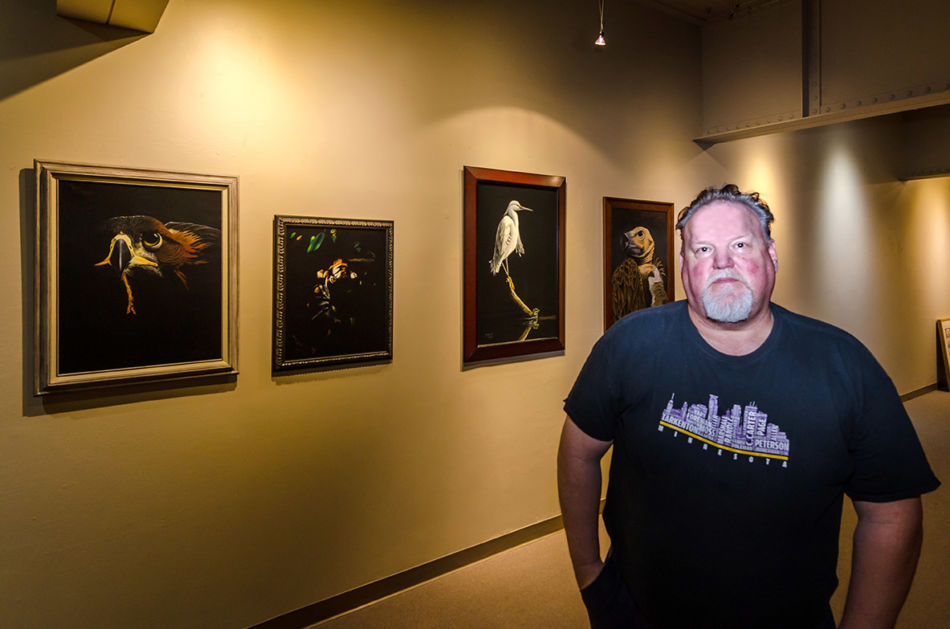 For local artist Dan Parsons, the midwestern landscape is as familiar and nostalgic as his childhood. His interest in the natural world has carried over from his early years into adulthood, and is the primary focus of his art today.

Born and raised in Aberdeen, Dan grew up surrounded by wildlife. Like many other children in the area, he spent much of his time hunting and fishing, and was outside all the time. “It was a natural progression,” he said.

Although Dan dabbled in the arts a bit while in high school, he had no idea it would later become his passion. He received a football scholarship to attend Bismarck State College, and in order to keep up good grades to keep playing, he decided to take what he thought would be the easiest classes – art classes.

Little did he know that doing so would jumpstart his career as an artist.

“I was lucky. I had a mentor that saw I had some talent and brought it out,” he said. “It just went from there. I’ve been painting ever since.”

While in college, Dan had the opportunity to take a trip to Paris with his art class, during which he and his classmates sold their art at a show. Since then, Dan has done it all. He frequently sells his work at Arts in the Park in Aberdeen, and has also been featured in major gallery shows. In September, he had a show in Aberdeen’s ARCC Gallery, and this upcoming April, he will have another show at the Bismarck Art and Gallery Association.

Since then, Dan has tried out just about every medium. He has experimented with everything from ceramics to watercolor, but currently prefers acrylics since they are faster drying.

When Dan is painting a wildlife scene, he tries to first think of what kind of emotion that particular piece should evoke. “When I’m doing a fall scene, I’m trying to bring out every emotion with that. Every season has its own thing, and I try to follow the season. But in the wintertime I’m painting summer stuff, because you just want to get outside again.”

Dan says his work is most inspired by the Dutch Renaissance painters. “I like to do dark backgrounds with bright highlights,” he said. “It just makes the colors snap.”

But the heart of his inspiration is simply the natural world surrounding him. “As an artist, you’re constantly looking at things around you. You’re looking at different sunsets, the colors you see, and anything that sets you off,” Dan explained.

Dan’s art captures the subdued emotions associated with the outdoors – of an early morning sunrise, the whistle of wings overhead, or the smell of freshly cut grain.

If there’s anything he learned over the years about being an artist, it’s to keep working and never give up, no matter what. After working at the post office for 25 years, Dan semi-retired to go south and travel the country in an RV with the goal of approaching galleries across the country with his artwork. Sometimes he was successful, sometimes he wasn’t. But no matter the outcome, he kept plugging away.

“There are so many times you’re going to be rejected,” he said. “You won’t get into a gallery or you won’t get into a jury show, or something like that. You just have to trudge on past it and keep going, because eventually it’ll happen. I expected to be selling in The Louvre or something when I was 20. But you’ll find out as you keep going that your work gets better, and you’ll gain a solid fan base.”

Today, he remarks that it is much more convenient to plug your work since technology has made approaching galleries much easier. “Now, I can work here and still have my subject matter. I try to keep it local.”

In the future, Dan hopes to quit his day job and do art full-time, although he is unsure how soon that will be. “You just don’t know,” he said. “You could be rich one week and poor the next. You have to go with what you love to do, though. Don’t do something you hate. You’ll be locked in.” // – Becca Simon