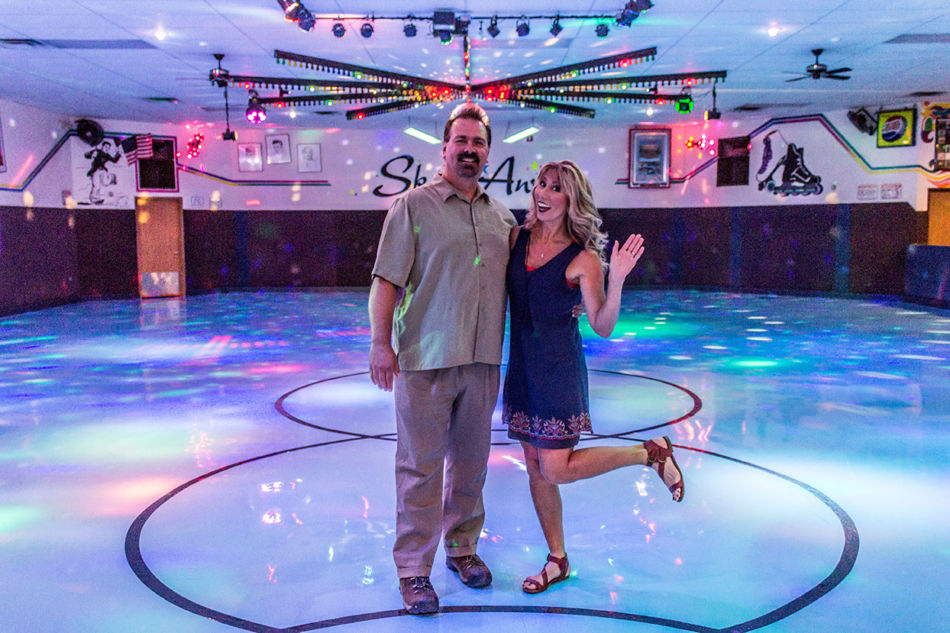 For Dee and Rob Brandner, roller rinks are nothing short of magic. They embody a piece of childhood where everyone can come together to have fun, make memories and, most importantly, form relationships that might just last a lifetime.

When Rob’s parents were young, they met while waltzing and skating at the Aberdeen Roller Rink, and Dee’s parents met at Skateland. When Dee was 15, Rob asked her to skate couples at Rollaway, and the rest is history.

That’s why, when they found out that Rollaway – the last surviving roller rink in Aberdeen – was closing in 1991, they knew they had to do something about it. They were in their early twenties at the time, with no money and little means to start a business, but that didn’t stop them. “We grew up on skates,” Dee explained. “We felt bad for the kids in Aberdeen that didn’t have one. I thought, oh my gosh, what are these kids going to do?”

A few years later, Dee and Rob started looking at buildings to see if there was a place they could use. After looking at quite a few, including the building that is currently the Eagle’s Club, they decided to buy land and build their own rink.

In April of 1996, SkateAway, which was named after Aberdeen’s old roller rinks Skateland and Rollaway, opened its doors to the public. On its very first day of business, the construction crew was still working hard to put up the final lights and finish the cubbies. When they walked out of the building carrying scaffolding only a half an hour before they were set to have their grand opening, there was already a long, long line out the door of kids who couldn’t wait to see their new roller rink.

Since that day, SkateAway has been the go-to venue for fun for kids of all ages. In 2004, the building was expanded to accommodate more birthday rooms and an arcade was added. Relics from other roller rinks in South Dakota, including the large hanging lights with mirror balls, found a home in Skateaway when they closed down. Other than that, though, not much has changed – and many will agree that that timelessness is what makes it so appealing. Today, Skateaway is the only roller rink located within a 200 mile radius of Aberdeen, the closest being in Sioux Falls. A couple years ago, Skateaway was even named “The Best Kept Secret of South Dakota.”

Rob and Dee’s main goal was to provide Aberdeen with a happy, fun, and safe environment for kids. Twenty years later, it’s safe to say that they did just that and much, much more.

For many like Dee and Rob, and their parents before them, roller rinks are a place where some of their most precious childhood memories were made and unforgettable bonds were formed. “When I post a picture on Facebook of [people at SkateAway] from years and years ago, someone will comment on it and say, ‘Oh my gosh, I haven’t seen you guys in awhile. We need to get together.’ That’s so cool because they’re still friends, and they still get together 20 years later,” Dee said.

Although the faces occupying the roller rink may change every few years as people grow up, the feeling of timelessness that permeates the walls of SkateAway never dies. When people come back in college or even once they have kids of their own, it’s like a flashback directly to their childhood. “We had a policewoman who used to go to Rollaway that brought her son out here for a birthday party,” Dee elaborated. “She came in, left for ten minutes, and came back. She hadn’t been in a skating rink since she was a teenager, and all of a sudden all these emotions and feelings came back, and she just started crying.”

It’s getting to know the people and being able to touch their lives in this way that makes Dee and Rob’s job so special. A lot of the kids come every weekend and start to feel like family. They know who is coming on Friday or Saturday, and whether they come in the afternoon or the evening. “If a kid is gone one week, the next week I’m like, ‘Were you sick last week?’ And they say, ‘No, I got grounded.’ I kind of laugh and say, ‘You need to clean your room so you can come and see us!’” Rob said.

They have been able to watch kids grow up from when they were little into their teens years. “When they come back, they’ll say they miss it so much,” Rob said.

“That’s one of the greatest feelings to me, because missing something from your childhood means you really enjoyed it. It’s like old home week, I always say.”

Rob and Dee are everything from the janitors to the managers, but if you ask them, they’ll say they don’t really have any complaints. “We tell all our employees it’s the most fun job you’ll ever have,” Rob laughed.

On top of getting to hang out with the kids, Rob gets to hear all the new, popular songs before they even hit the radio, as well as play classics from the 80’s. A lot of kids even now will request ACDC, Metallica, or even Madonna or Michael Jackson. “I don’t think there’s been a Friday night in the past two years where there hasn’t been a Michael Jackson song asked for, which to me is cool because it’s fun music to skate to.”

Part of what makes SkateAway such a positive environment for family is the extra care Rob and Dee put in to make sure the kids are safe. They don’t tolerate bullying or swearing, and kids that violate the rules are asked to leave. “Here, everybody is equal,” Rob said. “It doesn’t matter which side of the tracks you come from, it doesn’t matter who you are, when you’re here you all become friends. It’s an amazing thing to watch.”

Due to their role in the community as leaders and go-givers, Rob and Dee had the honor of being selected to be Frosty for the Snow Queen festival this year. In the 70 years of the festival’s history, they are the second couple ever to be chosen.

“We’re proud to be part of Aberdeen,” Rob said. “This a great community. People have supported us and we appreciate that. When we opened, we couldn’t imagine still being here 20 years later. It has just flown by, and the kids have been crazy fun. We just wanted to help kids. And it took us back to holding hands and skating, too.” // – Becca Simon