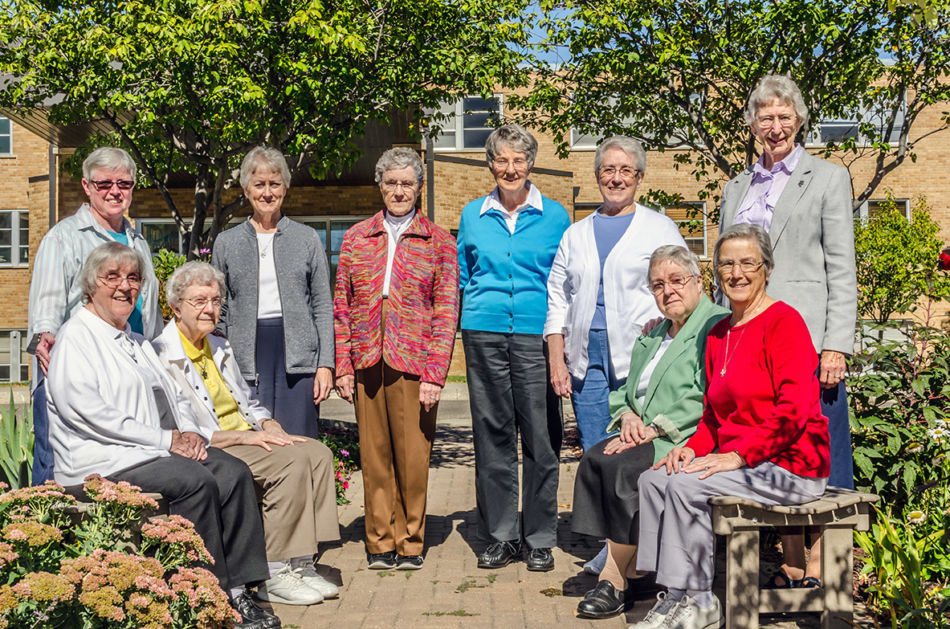 When the Presentation Sisters first set foot in Dakota Territory in 1880, they were met with rough wilderness and harsh climates. Their first home base was a sod house on the banks of the Missouri River, where they fought to survive the deadly winter by living on frozen antelope and condensed milk. Tasked with educating the Lakota people and the French settlers in a totally unfamiliar place, the sisters certainly had their work cut out for them.

Now, as the Presentation Sisters prepare to celebrate their 130th anniversary, things are certainly a little different. Thanks to the sacrifices of the sisters who came before them, the Presentation Sisters today live normal, comfortable lives instead of the grueling life of a pioneer. Since then, the sisters have served in communities across the state, halted a diphtheria outbreak, and began their own hospital. The impact of their resettlement from Dublin, Ireland to South Dakota is widespread, and they have totally changed the landscapes of the communities in which they’ve served.

Sister Lois Ann Sargent, a sister for 65 years and Presentation’s Archivist, has born witness to many of these changes in Aberdeen and has seen firsthand how the mission of their foundress, Nano Nagle, has been carried out.

“Nano Nagle was a teacher and educator, and she went out and visited with the poor and the sick in their homes,” Sister Lois Ann explained. “She taught in the penal times, when she had to teach in hiding. We’re trying to follow her example by working with children, the less fortunate, and the sick.”

After moving around from 1880 to 1883 to teach along the Missouri River, Deadwood, and Fargo, Reverend Robert Haire invited three sisters to teach at Sacred Heart Parish in Aberdeen in 1886 (now known as part of the Roncalli School System). Aberdeen’s status as a hub location between the multiple railroads intersecting in the region made it the ideal location for the sisters to begin building their legacy. In 1901, during a deadly diphtheria outbreak, the sisters were invited to assist the sick and eventually start a hospital. They were teachers at the time, with little background in medical training, but there was a call for help that needed answering, so they went right to work. In 1901, they opened their first hospital – what Aberdonians know today as Avera St. Luke’s.

The sisters’ involvement with the hospital soon led them to begin their own nursing program, which later led to the continuation of nursing education once Notre Dame Junior College moved to Aberdeen and was renamed Presentation College in 1951.

In the 1960’s, the sisters began to work as missionaries in countries around the world, including Mexico, Bolivia, Guatemala and Zambia.

Following in the footsteps of Nano Nagle, the Presentation Sisters’ mission is to “willingly go forth to any part of the world to work for justice, alleviate oppression and promote human dignity, especially among the poor,” and to “proclaim the Good News with missionary zeal, in a spirit of love and joy.” Without their contributions, Aberdeen’s healthcare and education systems would be totally different.

Today, many of the tiny schools across the state that the sisters staffed are closed, and the laity took over education. However, that doesn’t mean they’ve stopped educating – many sisters still participate in education efforts in Aberdeen and beyond, such as teaching English as a second language one-on-one to families, offering scholarships to students and providing internship opportunities. And although they no longer have any nurses on duty, they still have many sisters placed in their sponsored hospitals in other various positions. Now, they dedicate their lives almost entirely to serving the less fortunate by frequently answering the call to missions overseas and doing ample ministry and volunteer work within the community. “We’re known for our hospitality,” Sister Lois Ann said.

The changes in healthcare and education are not the only major changes the Presentation Sisters have seen over the past 130 years, however. When Sister Lois Ann came to join the sisters in 1951, they were still located in Butler Hall in downtown Aberdeen, just south of Avera St. Luke’s Hospital, which is now Kessler’s parking lot. Although it had served them well for many years, it was an old structure that was falling apart. In 1954, Sister Lois Ann got to be one of the very first residents of the new Motherhouse, which was the largest building Aberdeen had seen at the time and remains the home base for the sisters today. Since then, she has witnessed many major building renovations to the college and living spaces. “We want to keep it nice and livable, and very presentable to the public,” she said.

After one year of college, Sister Lois Ann entered the convent, and says that she has lived a very full life because of it. She was a teacher for 36 years and then a principal at several of Presentation’s schools. In 1990, she came to work as the Archivist, and has had the opportunity to learn much of the sisters’ past that she might never have known otherwise. She can tell you all kinds of stories, from how the hospitals used to have farms to how the sisters assisted in making pheasant sandwiches for soldiers during World War II. She even completed a very extensive timeline of the sisters’ history, which culminated in the creation of the Heritage Hall display, a hallway within the convent that gives a detailed glimpse into the sisters’ past.

“It’s been interesting,” Sister Lois Ann remarked. “I’ve never regretted becoming a member of the congregation. I was inspired by the sisters during my high school days, and was invited here by them.”

Currently, there are 68 Aberdeen Presentation Sisters and over 2,000 globally!

The sisters try their best to be visible in the community, hoping that by their examples, others may choose to take up their mission. Whether it’s choosing the vocation of sisterhood or joining their Cojourner program, which is a year long program in which members agree to carry out their mission, the sisters are hopeful that others will continue to follow in their footsteps.

Just as they did in the past, the Presentation Sisters will continue to spend their lives answering the call to “join in God’s mission by alleviating oppression and promoting human dignity in God’s people through prayer and apostolic service.”

According to President Sister Janice Klein, this milestone in history is no different from the many others throughout the sister’s 130 plus years in Dakota Territory. “Each moment in history has presented the Sisters challenges as they live this vocation of Love…freely received and freely given,” she said. “They discern the needs in their midst, providing leadership and witness as they respond.”

Sister Lois Ann’s life motto is one that reflects upon all of the Presentation sisters’ 130 years of history — “Live, live, live, joyfully, gracefully, and faithfully.” // – Becca Simon