Businesses
Gone But Not Forgotten
By Troy McQuillen | March/April 2017 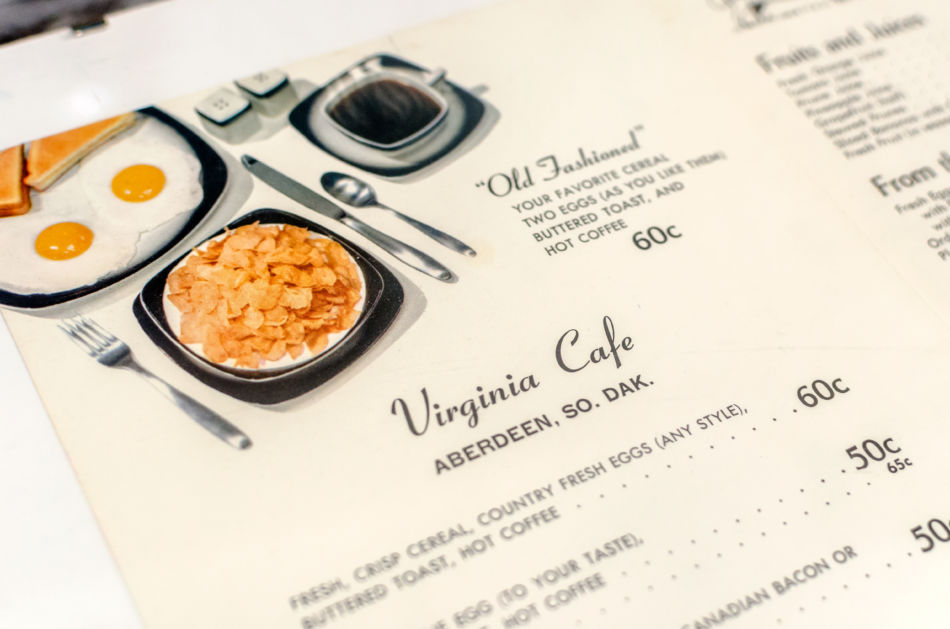 Aberdeen’s Virginia Café first opened in the original Alonzo Ward Hotel in 1917.  After that hotel burned in 1926, the restaurant reopened in its own building at 303 S. Main in 1927.  The Café was originally started by Greek immigrant, Dan Cacavas who eventually sold it to his cousins, Chris and Harry Cacavas in 1948.  Harry operated the cafe until 1963.  He old it to Virginia Amundsen, who, after five years, sold it to Bud and Marion Gallipo in 1968.  They lost their lease to the Feinstein family in 1978 and planned to reopen in another location.  Unfortunately, Bud passed away unexpectedly and the legend of the Virginia Café ended.

But who was Virginia?  That question has been asked repeatedly on Facebook and no one seems to know.  The most recent owner, Marion Gallipo, may have the answer.  She said that Harry Cacavas told her her that many Greek immigrants started restaurants all across the country.  To advertise their Greek heritage to other Greeks, and those that knew, the name Virginia Café was used on many of them.  In fact, online searches reveal that there are a few still open and they were indeed started by Greeks.  I found evidence of a Virginia Café in both Rapid City and Sioux Falls.  They weren’t franchises, just a common name to acknowledge their Greek origins.  Harry told Marion that Virginia meant hope to the Greeks.  I’ve found no evidence of that as of yet.  Perhaps it stemmed from the fact they were hopeful immigrants.  I’m still looking into that. // by Troy McQuillen