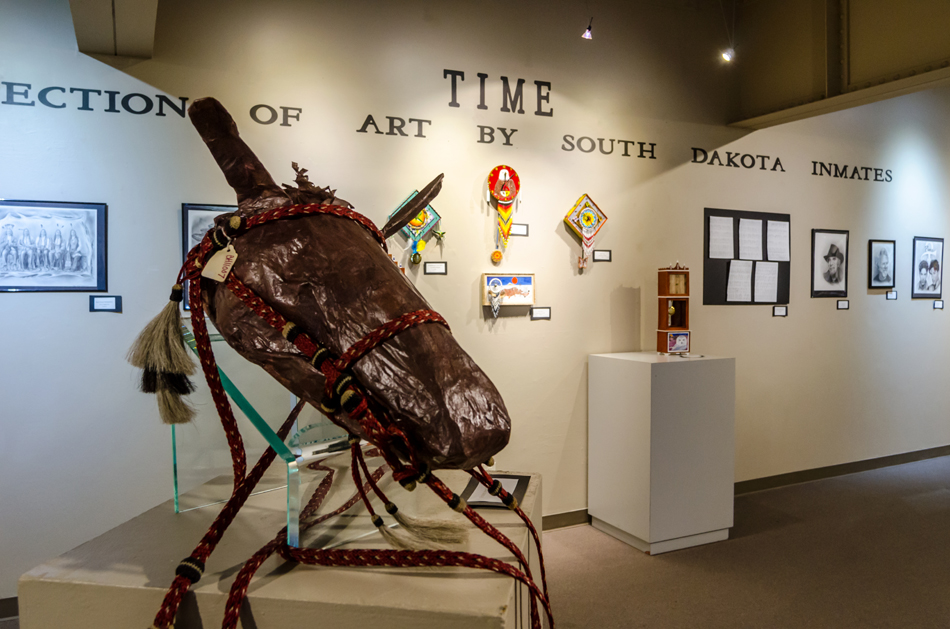 Do we create art simply for art’s sake, or is it something more? To Lawrence Diggs and Lois Becker, who helped facilitate “Time: A South Dakota inmate art show in Aberdeen, SD,” art goes far beyond aesthetic enjoyment. It is the legacy of humanity – the bridge between the past and present and people from all walks of life. The art show, which opened in the ARCC at the beginning of December, showcases the works of inmates in prisons across South Dakota with the goal of realizing our shared humanity and helping the inmates rejoin society as functioning, productive members.

As the Buddhist chaplain at the Sioux Falls prisons, one of Lawrence’s primary concerns is helping the inmates gain and maintain their sense of humanity. Oftentimes, if people lose a sense of connectedness to the rest of the world, it becomes increasingly difficult to talk about issues like crime on a level they can relate to. “It’s just a game then,” he explained. “If you don’t have a reason or a feeling that you shouldn’t commit crime, you start to think, what can I get away with?”

To curb this from happening, Lawrence decided to focus on the one thing all humans share: a sense of empathy and the feeling of connectedness. To do this, he encouraged inmates to discover their own humanity by talking about their feelings in the hopes that it would give them a safe space to explore the various emotions they were wrestling with. “Everyone struggles with that, even if they act like they have it together. We’re all struggling with the same things, we just put on different faces,” Lawrence said.

While working with a poetry group, it became clear to Lawrence that some of the members were interested in trying out other art forms as well. So he contacted Lois Becker at the ARCC, who had always been interested in putting together an art show with the work people have done in prisons. The idea caught the interest of many of the inmates and created an excited buzz both in and outside of the prisons, and although it took awhile for the idea to catch on, eventually there was a strong consensus that they should do it.

This is the second consecutive year for the art show, back by popular demand. Last year, it gained attention in 15 different newspapers across the country and was packed for the opening reception. This year’s show features 40 different artists with over 300 pieces of work from three prisons in the state. All proceeds from the show go to the inmates, many of whom hope to use it to help pay off some of their fines.

According to Lawrence, the reason they were able to make the art show happen was merely the fact that inmates were so passionate about doing it. This is partly because, by creating art, it helps them to put a face on who they are; first to themselves by helping them see themselves as something more than a criminal, and then to the community who can see their humanity through the artwork they have created. “One has to imagine first that they’re something better than what they see while they’re in prison. It’s hard to imagine that anyone else sees anything good in you when you don’t,” Lawrence said. “The entire time I was thinking, how do I create something so they can see themselves as something different, as something good?”

According to Matthew Borchert, a former inmate and artist who was exonerated from prison, the art show did exactly that. Although people are looking at artwork made by inmates in prisons, they aren’t viewing it that way – they are seeing it the same way they’d see any artwork. “That’s a big step in society, I think.” //–Becca Simon