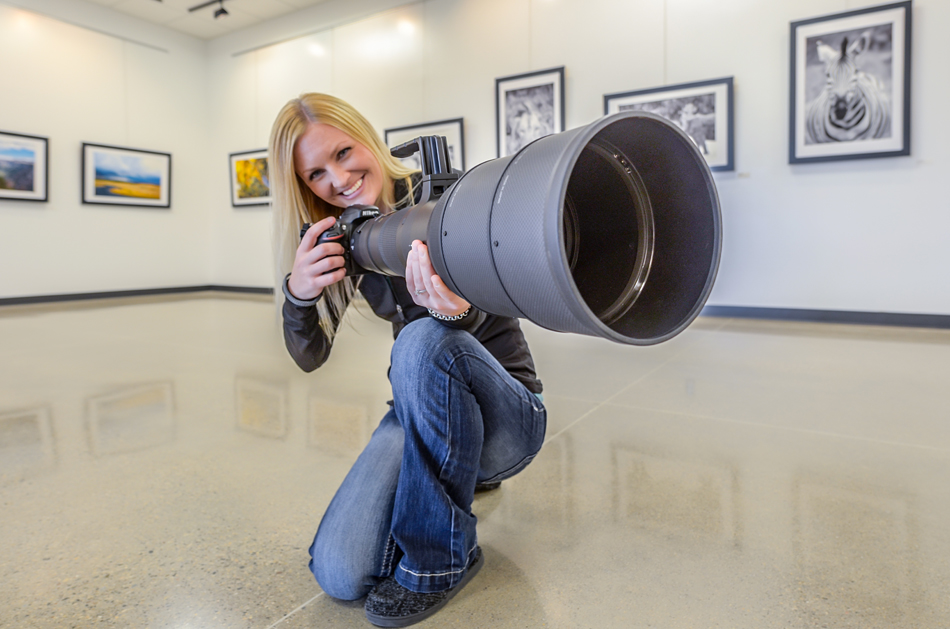 When Lauren Pretorius was a little girl, she spent much of her time watching the Discovery Channel and Animal Planet due to her fascination with animals and wildlife.

As an adult, that passion is still very much alive, and remains the central theme of her artwork today. Lauren’s photography and still-life paintings provide an up-close-and-personal look at the larger-than-life world of the wild as well as portray the simple joys she finds in every day life.

Although Lauren has been drawing since she was very young, it took her quite a bit of time to realize that art was the path she wanted to pursue. Right after high school, she studied pre-med at Presentation College for two years. While she was there, however, she quickly realized it was not the right path for her, and decided instead to take a semester off to regroup. During this time, she began painting and selling her artwork, and before long, she realized this was what she wanted to spend her life doing. So she transferred to NSU, became an art major, and hasn’t stopped creating since.

When painting, Lauren works exclusively in oil and aspires to make everyday objects come to life in a unique, interesting way. “I try to be quirky and fun with it,” Lauren said. “Instead of painting just an orange, for example, I’ll paint it with the peel smiling out, just to make it look different.”

Saturdays are Lauren’s painting days. It starts with a trip to Kessler’s or an antique shop in Bristol, where she hunts for various objects for still life paintings. These can range from food to antique objects, such as old teapots, that catch her eye. Once she has her subject matter, she prepares a hot cup of coffee as her inspirational fuel, sets the objects up in a unique way, and alters the lighting.

Photography, on the other hand, is a much different story. Lauren primarily shoots wildlife and the outdoors, making the process much more unpredictable. “I don’t really care for family pictures and things like that. I like taking pictures of things as they happen naturally.” With her 12-pound Nikon d800 camera and 600mm f4 lens in tow, Lauren is able to get up close and personal with all the wonders of the wild.

However, a lot of the impressive photos in Lauren’s repertoire may not have been possible if she hadn’t met her husband, Henry Pretorius, who is from Pretoria, South Africa. Since meeting him, she has been there five times, and makes it a point to go on an annual safari in their national parks. This is how she captured one of her favorite photos, a chilling picture of a male lion looking directly into the camera. “We were driving down the road and we had seen something in the ditch,” she explained. “We pulled over, and there was a male and female lion just lying there, 10 feet away. I was trying to get my lens out and he got up and actually charged us. He was looking right through me.”

That wasn’t the only instance of danger she has faced on her adventures, however. Lauren expresses the importance of being extremely careful on her safari adventures, and even recounts the time she and her safari crew were charged by a bull elephant. Now, she recounts, she knows what to look for and how to best stay out of harm’s way.

When she isn’t traveling to national parks to take photos, Lauren sticks close to the natural beauty she finds at home. She and her husband often drive out into the country, looking for anything that catches her eye to photograph. While the shots of pheasants and deer may not be as exciting as what she sees on her safari adventures, they effectively capture the peaceful South Dakota landscape.

Although Lauren still loves to paint, she finds herself leaning more towards photography these days. “It’s turning into my favorite medium primarily because I had to sell so many paintings to afford my camera,” she laughed.

For Lauren, there’s something magical about being out in nature that causes her to keep coming back, chasing that perfect shot. “I just love it,” she said. “Being out in the African wild… you can’t really explain it. The sights, the sounds, and the smells are something else. Even in South Dakota. When I’m outside, and the sun is coming up… that’s my inspiration.”

When NSU asked Lauren to feature her work in the Johnson Fine Arts Center Gallery, she was ecstatic. “This is new for me,” she said.

Since she started selling in 2004, she has sold close to a thousand paintings and prints of her photographs. She sells her work on her Etsy shop, WhimsicalWildArtwork, and on eBay. Her photography has been used on a variety of stock photography websites and is also available on Zazzle and RedBubble. //–Becca Simon

To learn more about Lauren and see more of her artwork, visit www.laurenpretorius.com.