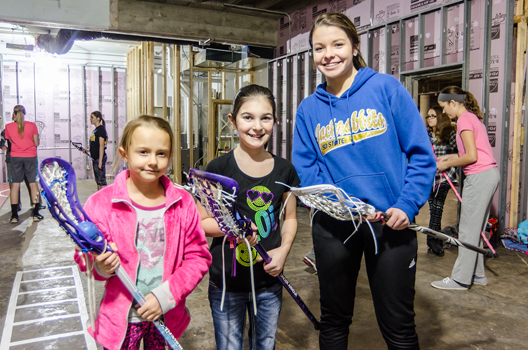 Lacrosse takes off in Aberdeen

For the past few years in Aberdeen, kids have been speeding across the field in protective gear, brandishing long sticks while partaking in the high-speed game of lacrosse. This will be the Aberdeen Lacrosse club’s third year in action, and it is expected to be biggest year yet.

The club started as part of a series of pilot programs meant to jumpstart lacrosse in South Dakota. After the program’s first year in Aberdeen, coaches Brad and Bobbi Burdette decided to form their own association. Although they started with only 20 players in their first year, that number doubled to 40 in their second, and they are expecting to grow those numbers even more for the spring 2017 season.

Because lacrosse is a spring sport, it provides the perfect opportunity for hockey and basketball players to stay on their feet during the offseason. In fact, many aspects of all these sports are quite similar. “A lot of our plays we use on the offensive side of the field are similar to what you might see in basketball, along with the speed of hockey,” Brad explained. “It’s definitely a fun sport.”

In fact, lacrosse was actually the very first sport ever practiced in North America. Native Americans, who would often use the game as an alternative to war with other tribes, invented the game, which at first took place over several days on huge expanses of land. The object of the game is simple: get the ball into the opponent’s net, using only a stick to catch, cradle, and pass it.

While this may sound difficult, Brad and Bobbi are confident that anyone can pick it up after a little bit of training. “Once you know the proper techniques of cradling, the sky’s the limit,” Brad said.

In addition, because lacrosse is still so new to the Aberdeen community, it might be especially inviting to those looking to start a brand new sport for the first time. “Everyone is learning,” Bobbi said. “If this is the first year you want to try it, no one else is going to be any better than you. There’s no intimidation, and you don’t have to meet any expectations to try out.”

The lacrosse season runs from April until the beginning of June, with preseason practices already in full swing. Right now, Aberdeen Lacrosse accepts kids in third grade and up, and currently has a boy’s varsity and junior varsity team. Brand new this year is the addition of a girls’ team. In addition, Brad and Bobbi are very excited to host a college lacrosse jamboree on March 4, in which SDSU, UND, St. Olaf and the University of Iowa will play several games at the PC Dome. After the games, the college players will be hosting a youth clinic.

Brad and Bobbi highly encourage anyone who might be curious about lacrosse to come out and give it a try. “We’re all at the beginning stage of this,” Brad said. “Let’s break down that wall of intimidation and say, ‘Hey, we’re all learning.’ For the last two years, our theme has been groundbreaking. We’re all starting at square one.” // – Becca Simon