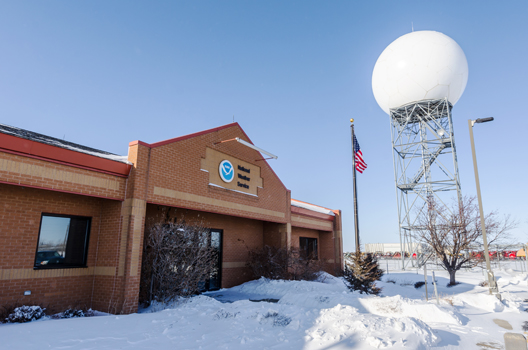 An Inside Look at Aberdeen’s National Weather Service

“How about this weather?” “Can you believe all this snow we’ve been having? It’s almost spring!” “I hear they’re calling for snow storms all weekend. It sure would be nice to be in Hawaii right now.”

Chances are, you’ve used the weather as a talking point to start a conversation more than once in your life. No matter how we conduct our day to day lives, the weather always plays a key role: disrupting travel plans, waking us up in the dead of the night with 60 mph winds, and making us wish we lived a little closer to the equator. Being in an agricultural state makes the weather even more important; we measure rainfall, runoff, and soil moisture. We speculate and agonize over the weather, hoping each season will be kind to us. Every day, we listen to forecasts: on the news, over the radio, and on our phones — and plan accordingly. Accurate weather forecasts can do a lot of things. They can tell a farmer the best time to plant, an airport control tower what information to send to planes as they land and take off, and warn residents of when a blizzard might strike.

Naturally, none of this would be possible without the National Weather Service and the people who work around the clock, seven days a week, to provide us with this information.

The National Weather Service is a government agency that operates under the National Oceanic and Atmospheric Administration (NOAA). Currently, there are 122 offices across the US. Our region’s weather service is located right here in Aberdeen, and covers 28 counties in northeast and central South Dakota, as well as two in west central Minnesota. Their mission is to “provide weather, water, and climate data, forecast and warnings, for the protection of life and property and the enhancement of the national economy.”

In order to achieve this goal, the office is open 24 hours a day, 365 days a year, with at least two people on every shift. Since the weather never sleeps, neither do they. Every single day, they gather all the data needed to analyze the weather, including satellite data, radar data, and forecast model data and also employ observers and spotters across the area that take manual observations and report back to them. 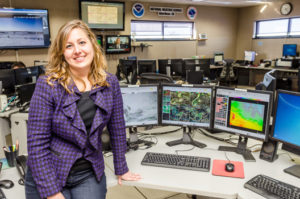 Kelly Serr took the time to show us how weather models work and how to read them in order to make a forecast.

According to Kelly Serr, warning coordination meteorologist at Aberdeen’s National Weather Service, everyone who works in the office is extremely passionate about what they do, even on days where not much is happening outside. “It can be boring when nothing is going on, and intense when we have lots of severe weather. You kind of run the two extremes in this profession,” she said.

Of course, most essential to their ability to make a forecast is the technology they utilize to collect data. Technology is constantly evolving at a rapid rate, and with it, their ability to create accurate forecasts. In order to measure temperature and humidity, a weather balloon is launched twice every day, once at 5:00 AM and at 5:00 PM. Attached to the balloon is a box containing a relative humidity sensor, a pressure sensor, and a GPS that tracks wind speed and direction. The distance the balloon travels provides the weather service with wind speed and direction, and eventually it expands, bursts, and is parachuted to the ground. If people find the balloons, a plastic bag attached to it instructs them to return it the National Weather Service simply by dropping it in the bag and sending it in the mail. 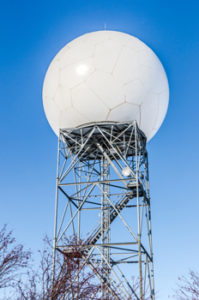 The Doppler radar stands tall in the front of the National Weather Service. Since 1994, this radar has helped detect weather systems via large pulses of microwave radiation.

Another tried and true tool the weather station employs is the Doppler radar, which has been in use since 1994. Many Aberdonians will recognize it as the large white dome stationed out near the airport. Inside that dome is a huge satellite dish that is constantly moving, sending out large pulses of microwave radiation at various elevations. After sending out a pulse, it waits and listens. If it hits an object, whether that be a storm cloud or even a bird, the energy returns and is processed into the computer systems back at the office. “The bigger the object, the more energy will come back,” Kelly explained. “We can interpret that in many different ways.”

But how, exactly, do you make sense of all that data and compile it into a forecast that the general public can understand? According to Kelly, it takes lots and lots of math and educated guesses. All of the data from the radar, satellites, and observers goes through computer systems and is sent into even more powerful computers in Virginia and Florida, where it is converted into mathematical equations that describe the atmosphere and how it will react and change over time. The resulting data that emerges from these equations are weather models. There are hundreds of them, and in order to make an accurate forecast, meteorologists need to understand when certain models will do well and when they won’t. For example, some may produce too much precipitation or the temperature may be off. “We spend most of our days analyzing exactly what it is,” Kelly said. “Our forecast runs out seven days; we’re focusing on making sure we have an accurate forecast for those days.”

Creating forecasts is not a solo effort, however. In addition to working together to come to a consensus within the office, our weather service must also communicate with neighboring offices. In the summer, they work with bigger regional offices such as the Storm Prediction Center to make sure their forecasts are as accurate as possible during times when the weather poses the most danger.

“There are groups out there that like to cause mass panic,” Kelly explained. “People grab onto that because we like drama. But when we put out a forecast, we’re never enhancing the facts. We verify our warnings, and we have to call the counties and confirm that what we predicted actually happened. We are held accountable for everything we issue.”

In fact, communicating weather to the public in a way where people can take action is one of the most important responsibilities the National Weather Service has. When a big storm is expected, they send out warnings to law enforcement, emergency management, and all the schools in the area. “During the Christmas storm, we had a conference call and invited all of these groups in order to brief them. We’re constantly doing better at getting everyone on the same page and knowing what to expect and prepare for,” Kelly explained.

Certainly, we are no strangers to severe weather. In an average year in the United States, there are over 10,000 severe thunderstorm warnings, 5,000 floods, and 1,000 tornadoes. This doesn’t even include hurricanes and winter weather. “We want to issue a warning and communicate to the public that this is a real threat, and they need to take action based on the information we’re giving them,” Kelly said.

As time goes on, the weather service is consistently getting better and better at predicting the weather, ensuring that our community is prepared to take the necessary steps to face any kind of weather. Radar is constantly improving and changing, and new satellites will continually be upgraded. A new satellite called GOES16 was just launched. The use of social media has also helped the weather service to stay in touch with the community like never before.

“Every year there is something we’ve never seen before, or something that’s really difficult to forecast,” Kelly said. “Last year we had several tornadoes in Day County, but they were really week and low top storms. They were to tough to detect and tough to warn for. If it were easy, we’d be right all the time. But we do a good job. If there’s a big system and it doesn’t go as planned, people often forget how many times it does go as planned.” // – Becca Simon